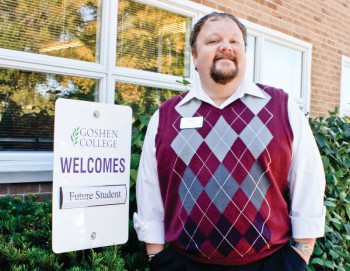 When James Townsend, Goshen College’s new vice president for enrollment and marketing, first arrived at the college in June, his first question was: “Where’s the admissions office and where do students park?”

That became a guiding phrase for Townsend as he toured the campus with a camera, taking note of anything that might be confusing or disappointing to a prospective student. He said the most significant detractors he saw were the nonfunctioning fountains in Schrock Plaza and by the Music Center.

Glenn Gilbert, the Goshen College utilities manager and sustainability coordinator, said, in reference to Schrock Plaza, “We looked at that fountain a while ago and decided not to fix it for cost reasons.” But Townsend has the authority to make things happen, Gilbert added.

“A lot of things cost money, but it’s all about the institution’s priorities,” Gilbert said. “He’s saying ‘Let’s get these things done.’”

But what about those confusing directions prospective students receive? Townsend said he hopes that visiting campus will be a more pleasurable and less perplexing experience now than it might have been three months ago.

At his suggestion, the college moved the Welcome Center from the south end of the Union into the northern annex of the same building, where the Center for Intercultural Teaching and Learning used to be. It’s a central location, with its own freshly paved lot.

Upon arrival, visitors will find a customized parking spot with their name on it and will be greeted and guided to their next destination on campus, Townsend said.

In addition to the changes in fountains and visitor arrivals, Townsend requested headsets for staff in the admissions office and proposed the new on-hold recording: anyone who calls the college and is put on hold hears a sound bite about life at GC.

The position Townsend holds is not simply “vice president of enrollment,” as was the case with his predecessor,  Lynn Jackson. The college expanded the portfolio; now he is vice president for enrollment and marketing.

Townsend oversees and coordinates work in the offices of admissions, public relations and financial aid.

“This is a big job,” said Jim Caskey,  who served as chair of the search committee that hired Townsend.  “He (Townsend) is fit for the challenge.”

Townsend brings 25 years of experience with him, having served in a variety of roles in admissions, enrollment and marketing at both Abilene Christian University and LeTourneau University. Townsend has a bachelor’s degree in psychology from Abilene Christian and an M.B.A. in human resources from LeTourneau University. He is expected to receive an Ed.D. in educational leadership in higher education from Grand Canyon University in 2013.

Caskey said he was impressed by Townsend’s grasp of financial aid, his skill in the use of social media and technology and his playful personality, which makes him enjoyable to work with.

Townsend’s passion for music and ecological sustainability, as well as his focus on conflict management and servant leadership for his doctoral dissertation, align with Goshen’s core values.

He said, “I felt at home as soon as I got here,” and added that even the colder, rainier weather enticed him to northern Indiana after years in the sweltering 105-degree Texan climate.

Townsend invites students and faculty to add words to the three poster papers on his office wall describing Goshen students. In scrawling marker are descriptions like passionate, caring and open, characteristics that, according to Townsend, describe his personality too.

However, it is Townsend’s outside perspective and fresh eyes that will most benefit the college, said Gilbert. “We overlook our imperfections because we’re familiar with them… we lose sight of that first (visitor or prospective student) experience,” Gilbert said. “I think he’s doing us a big service.”