Alcohol panel: Can consuming consume you? 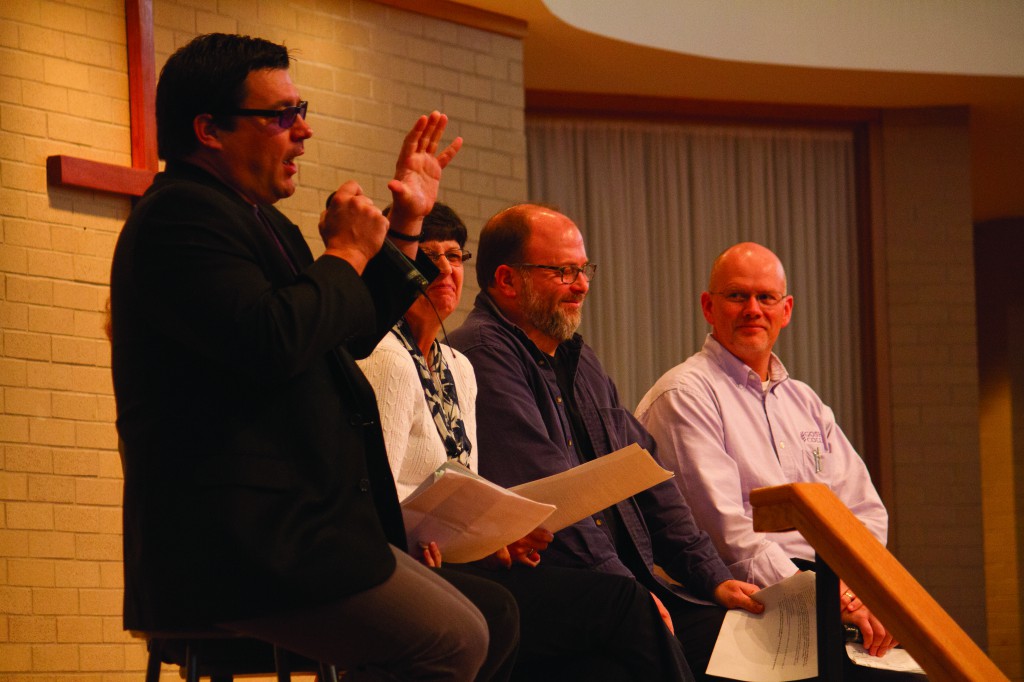 Students may know Bill Born, the Vice President for Student Life, as someone whose job involves enforcing Goshen College’s “no alcohol” policy.

But during this Monday morning’s convocation, students saw him on the front of a beer bottle.

Born said the can was picked up by a security guard last year who declared it one of the night’s “best finds.” The words emblazoned on the can,“Culture for service; Beer for pleasure,” would become the title of a panel discussion held during the convocation about drinking and recreational drug use at Goshen College.

While citing a range of experiences with drugs and alcohol, all panel members agreed that these were important topics to talk about. Hochstetler, the soon-departing counselor at Goshen’s Student Wellness & Health Center, said that student experiences she heard related to alcohol were “not all negative,” but that some were “very damaging.”

Miller said that she had seen students expelled from school over alcohol use and students responsible for the death of friends in alcohol-related accidents. Samuel offered that he enjoys drinking responsibly; he believes, however, that students used to be more discreet with their drinking.

During the discussion, Born took the opportunity to clarify the administration’s response to alcohol use. “We do not contact police if we know of something happening off campus,” he said, suggesting that some students hold a contrary understanding. Born also stated that drinking was not a “large part of the conversation” when the college moved to make it harder for juniors and seniors to live off campus, “but if one of the impacts is that students have to practice more discretion, I won’t apologize for that,” he said.

Topics brought up in the convocation were among student conversations this week.

Si Gustafson-Zook, a senior computer science major, said he supports some aspects of how the administration handles alcohol use on campus. “It’s nice not having a lot of drunken students walking around,” he said, “but I also don’t like how it limits options for cooking.”

Rachel Stoltzfus, a senior social work major, thought people would drink regardless of the convocation. “Some more than others, but it is going to happen,” she said. “I hope the convo makes people underage think twice about their actions, but it’s still their choice.”