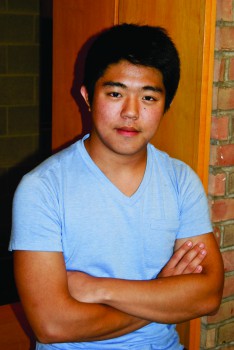 I know that Mennonites are against war and against the military, and I am also against war.

First of all, I am from South Korea. South Korea is technically in a war with North Korea, so we have a mandatory draft. We are drafted at the age of 20, when we graduate high school.

I have recently applied to serve in the army, a specific branch called the KATUSA. KATUSA stands for Korean Augmentation To the United States Army, which essentially means we serve the American army. The KATUSA has 2,000 positions available but there are a lot of people competing for those positions.

The KATUSA serves as a unit that is an ambassador of the Korean army to the American army. Soldiers in KATUSA stay with the American Army, interact with them and help them maneuver around the Korean peninsula. They also serve as translators because not many Americans speak Korean.

There is a 10:1 ratio of KATUSA soldiers in the army, so 10 American soldiers to one KATUSA. Many South Koreans apply to the KATUSA because we believe that it’s an easier way to serve mandatory service. The American army has nicer equipment and facilities than the Korean army. Also, there are incentives such as speaking English and getting off Korean holidays as well as the American holidays. But in the end, it comes down to the fact that most KATUSA soliders have a better military life and an easier life than the ones that serve active duty in the Korean Army.

The reason I applied to the KATUSA is because I want the best experience possible during my service. I want to have a comfortable, easy and lazy life that the KATUSA provides. Many of you know that I am lazy and fat.

My friends are also going to the army this year, and their occupations range from military police to the Marines, Army, Navy and special forces.

To tell you the truth, I received my physical before I came, and I hoped that I would be too overweight or have a mental or physical disease that would prevent me from serving. But my examination actually came out that I was healthy and fit for duty.

In some sense I was disappointed, but in another sense I was happy that I was healthy. It was a moment of irony. However, when I received my physical examination for the Army, I hadn’t thought about it too much and it didn’t occur to me that I would serve in the army so soon. But as soon as I applied for the KATUSA, it hit me hard.

I felt depressed, scared and had many mixed feelings. For those who don’t know, going to the Army basically means that I would be living and serving with a bunch of men for a long time. That thought alone depressed me along with the fact that I wouldn’t be able to graduate with my class.

Many of you might disapprove of me serving in the Army, but I hope you understand that it is a required service of my country. All of you are lucky to be born in the United States where mandatory service isn’t required. And for those who pick on me everyday, I am waiting until I get huge in the Army so I can come back and pick on those who pick on me.

Just because I applied doesn’t mean that I will go to the Army next year, but if I get accepted to the KATUSA, I will go. If I am rejected, I’ll probably serve in the Korean Army doing active service some time in my life.

There are some ways that I could avoid the Army, and one of them is to get American citizenship. I have thought about this, but I’ve had no luck getting the ladies. So … if there are any single ladies who want to help me get out of this situation, let me know!

If anyone is interested in talking about this, come to Students With Academic Goals House, aka Swag House, on Miller 2. We offer free drinks and food.

Minah Kim is a second-year math and business double major