KBCo. members are back in school after a year in Nashville 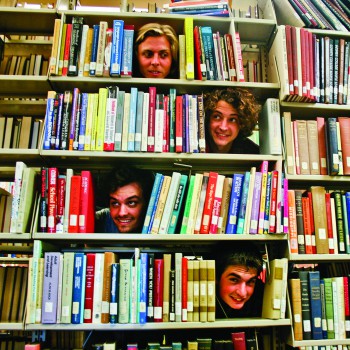 Four members of the Goshen College-based band Kansas Bible Company (KBCo.) returned to Goshen this fall. Charlie Frederick, Nate Klink, Jacob Martin and Jeff Yoder are back after taking a year off in Nashville to further their music careers with seven other members of the band.

Last year, the eleven members of KBCo. relocated to Nashville, Tenn. to find exposure as a group. However, for those who had yet to graduate, this meant making a choice between KBCo. and school. Frederick, Klink, Martin and Yoder eventually chose to join their friends and leave in the middle of their time at Goshen.

The band lived together in a large house and played frequent gigs at local venues. Though their time off allowed them to record new material, it also helped the four realize the value of a college education.

“It’s exciting to be back,” said Frederick, a senior history major from Bloomington, Ind. “Being out of school gave me a greater appreciation and understanding of what college is for.”

Now that they are back on campus, Klink and Frederick said they’re ready to “get down to business,” referencing a song from the Disney movie “Mulan.” The men are concentrating on their classes, writing papers and taking exams. Frederick is also on the soccer team and is a DJ for 91.1 the Globe’s Strictly Reggae. Martin plays the saxophone for Lavender Jazz. Although campus life is different than their Nashville experience, the four seem ready to be back at school.

Frederick, Klink, Martin and Yoder are unsure about their futures. But although they have considered graduate school, law school and other career options, their hearts lie in their music.

“It definitely developed into a passion,” said Klink, a junior biology major from Pennsylvania. “It’s exhilarating to be up on stage and hear the audience clapping and screaming for you — it makes it feel like what we’re doing is worthwhile.”

Klink hinted that there will be an album released sometime in the fall. He and Martin gave some insight into what the other seven band members are up to in Nashville.

“Keep an eye out for a music video, live videos and other projects, including a video game,” Martin said. The band is especially excited about their most recent album, Hotel Chicamauga, which was inspired by their home in Nashville.

Hotel Chicamauga is a lot different than their first album, Ad Astra per Aspera, in that it is more conceptual. According to Martin, a second-year history major from Colorado Springs, Colo., “You can’t listen to one song without listening to the whole album; it all goes together.”

What will they do after graduation? Heading back to Nashville to join their friends, getting a job with their degree, going to graduate school or even getting married and starting families are all possibilities.

“It’s all up in the air,” said Yoder, a senior Spanish major from Ohio.

For more information on KBCo., check out the band’s website at kansasbiblecompany.com