A battle for Wyse 3

History department seniors have used their senior seminar class this semester to apply their knowledge into senior theses, but in the process, have stumbled upon a piece of history about their own department.  An old football, which resides in the kitchen on the third floor of Wy 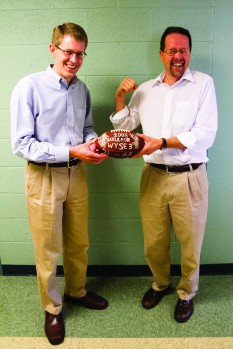 se hall, bares a story nearly seven years old that some students are hoping to reenact.

“Back in 2005 history majors challenged bible/religion and PJCS majors to a football game,” said Steve nolt, professor of history. “the football prize remains on Wyse 3rd as a trophy.”

The third floor of Wyse Hall is home to the bible and religion, PJCS and History departments. According to nolt, the football game came to be known as “the battle for Wyse 3rd” or “the showdown for Wyse Hall.”

Daniel Penner, a senior history major, heard of the game after inquiring his professors about the football during senior seminar. “it’s been there as long as i can remember it,” he said. “John [roth] sort of explained to us in his story telling way the history behind the football.”

Penner learned that the game was played on April 10, 2005 and was won by the history department students, 63-21.

An invitation from the history students to the bible and religion and PJCS students has yet to be made. However, Penner hopes the game will take place on the Saturday of the graduation

commencement ceremony so that parents and family visiting campus will have the opportunity to watch.

He and other history seniors plan to issue the challenge to the opposing departments on Friday. they hope to see results similar to those in 2005.

“i know that the history department was victorious, and i feel like history will repeat itself once more,” said Penner. “A bible and religion major, ben baumgartener, has a broken leg. You might say that we have a leg up on them.”

in 2005, no professors participated in the game, but Penner hopes to include them in the rematch.

“We’re trying to get professor participation on the playing field,” he said. “However, they don’t seem too keen on the idea, so we might have them more in a coaching role.”

Penner hopes that the game this year will begin a tradition. “As a history major, i feel like it’s something we can learn from and continue,” he said, “because Wyse 3 is not won or lost forever but from year to year.”