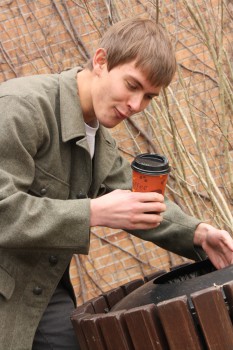 One day before April Fool’s day, I received an email forwarded to me by Matthew Amstutz. The email was from a man named “Mark Saltveit,” who claimed to be the editor of “Palindromist Magazine” and the world champion of palindromes, dubbed by none other than Will Shortz, the crossword king.

What’s more is that he wanted to interview the author of the palindromes featured in The Record. April Fool’s, right? This guy can’t be real. The Palindromist? Really?

The Palindromist, believe it or not, is a publication that has been around in some form or other since 1996. In that time it has had seven issues, each of which has been distributed to a subscribership of about one hundred. The Palindromist‘s website has a trove of resources for both the budding and experienced palindromist, including “The Palindromist’s Manifesto” and a paper on the “subliminal semantic concepts and metaphorological implications” of the palindrome by Dr. Erika Greber of the Ludwig-Maximillian University of Munich (A good read if you’re into post-Bakhtinian semiotic theory or logoreversibility).

Mark Saltveit was indeed victorious in the first World Palindrome Championship. He’s an upstanding stand-up comedian, freelance writer and graduate of none other than Harvard University.

And he wanted to interview me, Goshen College’s humble palindromist laureate, for his magazine. I obliged him and graciously sent a few words his way – a window into the artist’s soul. I am now featured in the post “Land O’ Goshen” on palindromist.org. There is an article to follow. Who knows what’s next? Book signings, a chateau in the south of France? I certainly hope so.

I had known there were others out there like me – one of the members of my favorite band, WHY?, is an avid palindromist – but I had no idea there was a palindrome contingent! There are literally dozens of us! One famous palindromists is Demitri Martin … presumably, the list goes on.

I hope you’ve enjoyed the not-too-coherent palindromic snapshots of campus life. I’ve enjoyed divining them from the cosmic lexisphere. Consider this my resignation. If any ambitious students out there wants to attempt the herculean task of weekly palindrome writing for next year, start practicing now! Email me if you’re considering this: serious inquiries only. Palindrome writing is not hard with practice,  so why not try it in your next class?

For those who didn’t get it – last week’s palindrome was not a palindrome. It was an April Fool’s joke. To make up for it, I wrote three graduation-themed palindromes for this week. Enjoy!