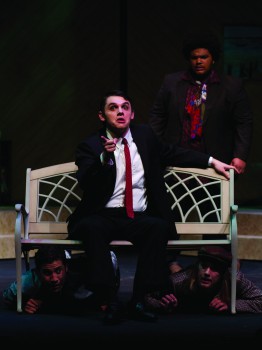 This Friday, the GC Players will premiere its production of Shakespeare’s Twelfth Night with a bit of a time-warping twist.

While maintaining all the classic themes of Shakespeare’s text, director Doug Liechty Caskey has shifted the setting to 1960s America, in a small coastal city. Actors don suits and ties, the set features a “living room” complete with poofy, upholstered couches, and selections from artists like Peter, Paul and Mary and Pete Seeger flow in and out of scenes.

Emily Bowman, a senior, who plays Viola in the show, is excited about the new twist. “Setting the play in the 60’s gives it a more present and accessible era to us today. The themes of Shakespeare are timeless and that is probably one of the reasons that the plays have captivated audiences for over 4 centuries,” Bowman said. “1963-66 was a time when the U.S. was poised on the edge of change and this play with its unusually strong female roles and subtle political shifts echoes that decade.”

During a bonus convocation this Wednesday, a brief preview of some of the play’s pivotal – or simply humorous – scenes was presented to an audience of students already well-familiar with the play. Between the two presented scenes Liechty Caskey asked how many students had studied or seen a performance of Shakespeare’s text, and saw a crowd of hands shoot up in response. Most people have experience with reading or studying Shakespeare, but, as Lewis Caskey (Sir Andrew), a junior, said, “Theater is totally different. It’s really fun to think about Shakespeare as something other than old and boring …  it makes it more entertaining for audiences not drawn to Shakespeare for Shakespeare’s sake.”

Jay Mast, a senior who plays Orsino, thinks the show is just as much fun for the actors. “Shakespeare is great because it not only has the character and complexities of plot written in, but utilizes rhythm and sound of the line as well. The lines are music, essentially.” In fact, in this mainstage production, lines of poetry are actually sung, sometimes to guitar accompaniment-another tweak in Liechty Caskey’s production.

Liechty Caskey hopes to bring a newness to this well-read text through a number of unique choices in design and setting that reflect a more “upbeat, positive approach” to the script, including attempts to “offer some redemptive quality to the end of the play.” From the unique setting to the choice to set the play in spring instead of winter, these choices that distinguish the production are brought to life by a design crew of almost 40 people. Central to creating the 1960s feel is the audiovisual design provided by Patrick Ressler , 2011 graduate, who developed a soundtrack which actually moves through the years, from 1963-66 as the play progresses.