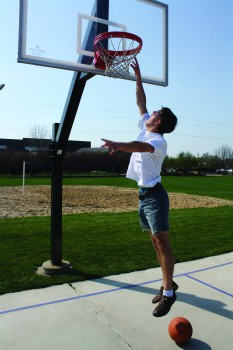 Did you know that in addition to “B-League” basketball, many colleges have sports teams that actually go to other colleges and play against them? I learned that this week, when my friends convinced me to sign up to participate in a sort of legal (they tell me) gambling: I filled out a “bracket” for the “March’s Madnesses.”

A bracket, in case you have never seen one, looks a lot like the reverse family tree of an elder who sired two separate familial strains. Each branch leads in towards a single point, which is the seat of the champion.

Filling out a bracket consists of predicting which teams will win in premeditated contests, called “matches,” and finally who will be the overlord of basketball for the next year. I suspect the champion also receives some sort of gilded cup as a trophy.

If you want to fill out a bracket for this year, I am sorry. It is too late. As brackets are a matter of divination and prognostication, they must be completed before certain events (i.e. basketball matches) occur, and the basketball contests began last week.

However, if you want to make a bracket of your own next year, know this:

Teams are ranked by how many seeds they have. Ironically, those with more seeds are not more viable, but less so. Go figure, environmental scientists. Choose teams with low seed numbers.

Choosing teams based on personal connections or sentimentality will not help. I chose Temple, a school near my home and the alma mater of one of my heroes (Bill Cosby, and also, now that I think about it, my dear mother), to win it all, but they lost in the first round.

The most important thing about brackets, though, is not whether you win or lose; it’s how much you talk about your bracket with anyone who will listen.

A note to those who would like to try this: If ESPN lists a team as something like “Colo St.,” it is pronounced “Colorado State,” not “Coh-loh Street.” Gonzaga is not a kind of Italian cheese; Xavier is not an X-man and somehow, New Mexico and New Mexico State are different things.

I hope next year you all come down with a near-terminal case of March insanity. Who knows? If enough people get involved, Goshen might think about starting a basketball team of its own!