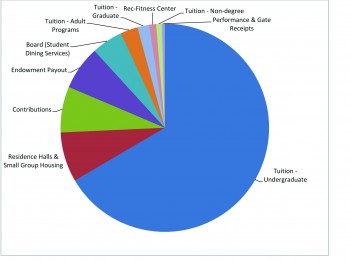 Jim Histand, vice president of finance, announced the tuition rates for the 2012-13 school year to students in an email on February 15, which showed a slight increase from the 2011-12 school year. Although Histand notes that these increases are similar to most years, they leave some students asking more questions about the finances of Goshen College.

An operating budget has been set for the 2012-13 school year to cover expenses such as labor, salaries, and benefits; financial aid; advertising and other administrative costs; and maintenance.

Other income comes from the Rec-Fitness Center and ticket sales to performances and athletic events.

Tuition received from adult, graduate and non-degree programs, combined with undergraduate tuition and residence fees contributes nearly 85 percent of the planned budgeted income from 2012-13. Some of that money directly contributes to residence hall building maintenance and the food contract with AVI Fresh, which was expensed in the 2011-12 school year at $1,107,710.

According to the 2010-11 GC Annual Report, which reported financial figures from the fiscal year ending June 30, 2011, contributions and bequests from donors have slightly fallen from the previous 2010 fiscal year.

Special attention should be paid to the years attributed to certain figures in this article, so as not to compare dissimilar facts of separate years. Any discrepancies in percentages reported are due to rounding.