Happy Dance begins with a bite 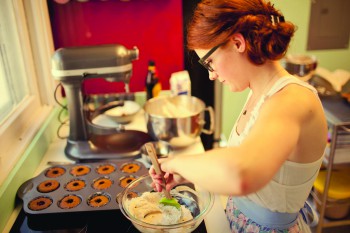 His wife, Margaret, is the owner of Happy Dance Cupcakes and employs Michael as her taste-tester. It comes in handy that Michael works at Chamberlin Elementary; the teachers have delighted in trying Potuck’s earliest recipes.

“It’s fun to watch people’s faces as they taste the difference between a from-scratch, gourmet cupcake and your run-of-the-mill store-bought cupcake,” said Michael. “You have to make it down to the lounge pretty quick to get one.”

Margaret Potuck is a California native who moved to Goshen two years ago and found no cupcake shops in the town.

“I wanted to make a new dessert available,” said Potuck. “My cupcakes are gourmet which is what makes them different from anything you can buy anywhere else in Goshen.”

Potuck began her business in her home on East Douglas St. last September after a months-long code inspection with the Elkhart Country Health department.

“The process took awhile because the health department said we had to have a separate kitchen,” said Potuck. “We also had to build a hallway between the two kitchens so there was space between the personal and the business.”

While she was waiting to meet health codes and receive permission to open her business, Potuck experimented with flavors. Her family and friends would tell her what tasted good and what didn’t.

“I am one of her main taste testers,” said Michael. “It’s a very nice gig. I logged a lot of hours when she was first creating her flavors, but I don’t have to work quite so much now. I am a little biased, but the chocolate peanut butter and the cookies and cream cupcakes are at the top of my list of favorite desserts right alongside ice cream from The Chief.”

Potuck creates flavors such as crème brulee, chocolate peanut butter, pumpkin spice latte and cookies and cream. Potuck also bakes for the season and the holiday, including red velvet for Valentine’s Day and chocolate peppermint for Christmas. Each cupcake has some type of filling, such as chocolate ganache, mousse, or carmel buttercream, that complements the frosting.

All the cakes are baked out of her home from scratch, usually the day of delivery, and are done “hopefully 45 minutes before pick-up.” Two ovens allow her to bake 48 cupcakes at a time and the whole process takes about two hours, depending on the kinds. Potuck is always thinking up new flavor ideas.

Potuck’s love of desserts began when she was growing up in Newport Beach, Cali.

“I have always baked and cooked with my mom,” said Potuck. “She taught me how to put together ingredients and be imaginative with flavors. When I was little, my grandma came from Florida and made a lemon meringue pie. I was young enough that I couldn’t remember her name and I asked, ‘when is Grandma who made the lemon meringue pie coming back?’”

Potuck graduated from Indiana University in 2009, where she majored in theatre. While in college, she took a cake decorating class at Michael’s craft store.

“I knew then I wanted baking to be a hobby,” said Potuck. “ I had always enjoyed watching Ace of Cakes, so I started experimenting. I guess I was good at it.”

Potuck’s relationship with future husband Michael blossomed when they met in the Singing Hoosiers. She sang first soprano beside Michael, who sang second tenor. After the couple married, they moved to Nashville. Potuck tried to work in bakeries but began to realize she wanted her own business.

“We want to start a family in the future and I wanted to pick a consistent job where I could be home,” said Potuck. “The best thing is that I can make my own hours, run the business how I want to and I don’t have to ask my boss if I can go on vacation.”

Happy Dance Cupcakes is a young business – Potuck began taking orders in October – but Potuck says it is beginning to pick up. She will be baking for several weddings this summer and will have a stand at the Farmer’s Market in Goshen beginning Feb. 25. Her dream for the future is to have a space downtown. As far as how the cupcakes taste, Potuck believes the name says it all.

“My mother-in-law says ‘happy dance’ when something good happens,” said Potuck. “The name makes you smile. You do a happy dance when you eat a cupcake.”