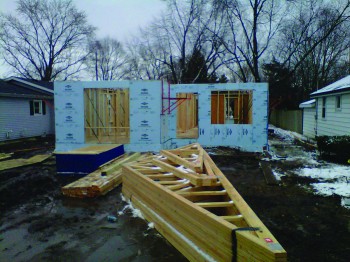 Students, faculty and staff showed their support of community member Eddie Mayorga over spring break by lending a hand in the construction of his new home.

In spite of chilly weather and rock-hard ground, over a dozen members of the Goshen community stopped by the building site on Wednesday morning to assist in raising the roof.

Over the past several months, Goshen has been raising funds to make Mayorga’s dream of owning a house become a reality. Events including a basketball game, Kick-Off and an AVI Fresh brunch helped to raise awareness and funds. Last week it was time to finally raise the walls of Mayorga’s new home in a partnership with Habitat for Humanity.

Another volunteer was Brian O’Leary, a junior. O’Leary was pleased with the opportunity to get to know the variety of people who were lending a hand. He even worked alongside Mayorga. “He seems like a really cool guy,” said O’Leary. “I thought it was great that he was out there working on his own house.”

About raising the roof, O’Leary added, “It’s nice to have a concrete way of doing service, with a visual end product. I liked being able to see the progress we made; at the beginning there was no roof and at the end, there it was!”

Though the basic structure is complete on the Mayorga house, there is still work to be done. Volunteers are needed this Friday and Saturday, as well as the week of March 20.

The last fundraising opportunity will be an ISC coffeehouse on March 17. Tickets can be purchased online.