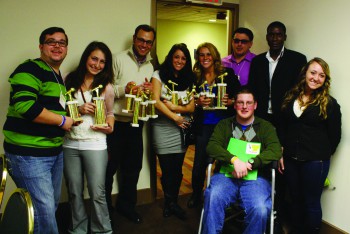 Goshen College broadcasting students returned from spring break with more to flaunt than a temporary tan. Goshen’s radio station, 91.1 The Globe, and biweekly news program, The Correspondent, received recognition from two separate organizations over the weekend.

Several representatives of The Globe traveled to New York City to participate in the Intercollegiate Broadcasting System conference.

The weekend-long event consisted of a number of panels and workshops and included an awards ceremony. The station was nominated for 15 awards this year after enjoying a year as Best Station in the Nation.

The team did not come away from the conference with a second consecutive win, but it did receive top honors in four categories.

Goshen received more trophies than any other college in the nation. First place recognition went to Kelsey Morris, a junior, with Best Station Promotional Event; Benjamin Kelly, a junior, with Best Sports Talk Show; Trisha Handrich, 2011 graduate, with Best Live Show; and to the entire station for Best Use of Social Media.

The Goshen team came away from the conference with a deeper appreciation for the benefits they enjoy as students at a small school. Summer Hasan, a senior, is the student station manager.

Hasan said, “There is no doubt that a GC broadcasting student is more experienced than those at larger schools. Many schools have hundreds of DJs searching for airtime, which means that a student may get one shift every two to three weeks. Compare that to Kelsey’s morning show, which airs every weekday from 6 to 9 a.m.”

In talking with students from other schools, it was especially apparent that Goshen’s small size is no indicator of the amount of coverage it can provide. Kelly, whose contributions to the sports department earned him nominations for four awards, said, “In the WGCS sports department we have the chance to broadcast upwards of 120 high school and Goshen College athletic events throughout an academic school year. Schools that attended the conference said they were lucky to get five games a year on the air.”

In addition to earning GC the School of the Year title, broadcasting students won 17 radio and television awards, including first place by Hasan for Radio Copywriting; Morris for Radio Air Personality;  Jacob Landis-Eigsti, a senior, for Music Video; and Yolo Lopez-Perez, a senior, for Television News Package.

In a seemingly endless trail of wins by Goshen students, it is also noteworthy that Morris and Kelly will be traveling to Las Vegas in April to receive awards from the Broadcast Education Association.

Morris has been awarded first place for Best On-Air Radio Talent and Kelly will accept a third-place award for Sports Reporting.

Amidst the excitement of a successful year at both the state and national levels, students at The Globe and the Correspondent are keeping their eyes on the future. With a small team and a large following, they cannot afford to lose momentum.

This year IBS awarded the title of Best College Radio Station in the Nation to the University of Tennessee-Martin.

Hasan feels confident in the abilities of the incoming senior class to give them a run for their money at the next conference.

“You better bet next year the Globe will be wanting that title back,” said Hasan.

Students can enjoy the services provided by the Radio and Television School of the Year by tuning to 91.1 on the FM dial and watching the Correspondent. GCTV is channel 18-1 on the campus cable system and the Correspondent can be seen at http://www.goshen.edu/gcjournal/correspondent.php.