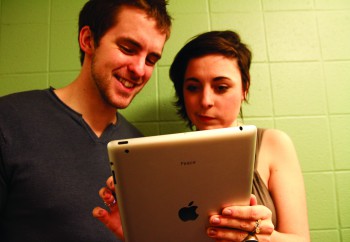 Ross Peterson-Veatch, associate academic dean and director of curriculum for CITL, is one of the minds behind the proposed plan.

“The basic proposal is that all incoming first-year first-time students will receive the latest iPad,” said Peterson-Veatch. “This initiative coincides with the launch of our new core curriculum. Professors will teach the new Identity, Culture and Community course, which every first year will be required to take, and iPads will be integrated into that course.”

The iPads would be part of the larger plan to implement GC’s new academic core, which Peterson-Veatch hopes will be a launching platform to incorporate new technology. Faculty who are teaching the Identity courses would be provided iPads and there would be a significant pool available for check-out to any student or staff member who wants one. The college would also plan to hire a full-time instructional designer who would bring technologies to campus in many different ways, in the classroom and online.

“In a sense this is all new, but in a sense it’s not,” said Peterson-Veatch. “We’ve been working on developing new programs for a few years. When you launch a new program, you create a platform for innovation. We want to provide the opportunity for faculty and students to use mobile technology in any class.”

A group of faculty, the strategic enhancement of management and marketing task force, began meeting in the last few months to talk about how they could raise the college’s profile and begin an assessment plan that would connect back to the classroom. In mid-January, a task force was formed to work on a proposal.

Richard Aguirre, director of public relations and member of the task force, said that a final push in the decision was academics.

“Although there might be the general feeling that all students have access to technology, a lot of international or first generation students don’t come to college with a laptop,” said Aguirre. “So it is the equity of providing students with the tools they need.”

Students have already begun to engage in discussion about the proposal. Two informative sessions were offered Monday to provide an opportunity for questions and concerns. Michael Sherer, director of ITS and a member of the task force, spoke about the cost of implementing the initiative.

The iPads, plus all the software and new hires will cost an estimated total of about $200,000.

“This doesn’t affect tuition a whole lot,” said Sherer. “The question we need to be asking is how much excitement does this iPad generate on campus? Does it make us a better school? Does it engage us? If it does, then the cost is basically free.”

The decision to approve the iPads will have to be made fairly soon if it is to be implemented for the fall. The task force anticipates wrapping up their proposal in the next few weeks, which will then be sent to the President’s Council for a final vote.

“Members of the task force would welcome hearing more discussion,” said Aguirre. “We are committed to answering questions and accepting opinions. It will be good to get feedback.”

Said Peterson-Veatch, “You can see technology as a problem or you can engage directly with it and turn it into something useful. We have pursued these kinds of technologies for awhile. That gives me a tremendous amount of faith that it will work.”

To engage in further discussion concerning this issue, students can contact people such as Aguirre, Michael Sherer, Randy Gunden or Chad Coleman, who are all members of the task force.