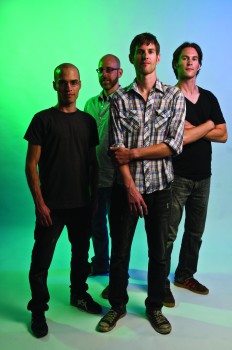 It’s been eight years since Goshen has been able to hear the instrumental jam band Lotus perform. Finally, they are headed our way.

The five-member band, formed at Goshen College, has been hard at work.

With the recent release of their self-titled fourth studio album, the band has just come off a fall tour and is preparing to start one for the spring. Special guest The B.E.A.T. will open for Lotus at the Goshen Theater on February 16.

Lotus is particularly rooted in electronic and rock music and is predominantly instrumental instead of vocal.

The band consists of Mike Greenfield on the drums, Jesse Miller on bass and sampler, Luke Miller on guitar and keys, Chuck Morris on percussion and Mike Rempel on guitar.

Jesse Miller and Luke Miller graduated from Goshen in 2002, and former member Steve Clemens graduated in 2000.

Since their start in Goshen, the band has played at music festivals, including Bonnaroo, and sold out at premier theaters and clubs. Lotus’ stop in Goshen will be their third on a 31-date tour.

Their last show was on New Year’s Eve in Philadelphia and the band has had most of January off. Jesse Miller says everyone is excited to get back on the road.

Shortly after the release of the new album came a music video for one of the songs, “Blacklight Sunflare.” According to Miller, it is one of the most popular tracks, so Jacob Landis-Eigsti, a Goshen College graduate, wrote and produced the music video starring Sam and Vanessa Jones, both juniors.

The band has also been hard at work, not only improving and freshening up their music, but also working on their live light shows. Miller says that because Lotus is  an instrumental band, the light show is a good complement.

He went on to explain that the light show is a very flexible part of the show and is not synched to any  particular song; it can be used for different parts of the performance.

With the improvements on the light show and the recent release of the new album, Miller says Goshen fans can still expect to hear some of the old stuff mixed in with the new.

Miller says that the band, which is very into progression, realizes some people enjoy this idea and others do not.

“We try to strike a balance,” Miller said. “We try to touch on older material at shows but we also like to keep it fresh for ourselves and try to push forward as quickly as we can.”

The doors open early at 6 p.m. and the show starts at 7 p.m. Tickets are 18 dollars in advance or 20 dollars at the door. To purchase tickets in advance, go to goshentheater.com.