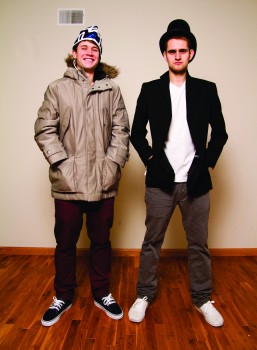 Josh van Allen is a psychology major and Mark Baker is an interdisciplinary major. Both van Allen and Baker came to the United States in 2008 and play on the men’s varsity soccer team.
Interesting Facts about England:
1. What do you miss the most from England? (Besides family)
Baker– I mostly miss my friends, fish and chips and my mother’s cooking.
2. What do you like and dislike about America?
van Allen– What I like: The people are very friendly here; everybody says hi to you.
What I do not like: Although I go get fast food once in a long while, I am not a big fan of how many fast food chains there are. I also feel as though it is difficult to travel to a bigger city like Chicago, partly because one has to go through the hustle and bustle of getting a ride to South Bend and then from there boarding a train or a bus to Chicago. At home it is much easier to travel; there are lots of transport
options even if you live far from the capital.
Baker– What I do not like: I just miss my girl Coral … yes, that’s right, her name is Coral, like the “coral reef”… just the coral part, though.
3. What is your favorite childhood experience?
Baker– My favorite memory is playing down the “spiney” (a large hole in
the ground) with my two friends, “Splodge” and “Ledge.”
van Allen– My favorite memory is hiking at Brownsover. I would hike with 10
to 12 of my friends and we would carry our tents and camping supplies.
In particular, I will never forget the one hike to Brownsover that we
treated as a farewell to my close friend, Kelvin Halford, before he moved
to Australia.
4. What inspired you to come here?
van Allen– Back home I played for Lutterworth Athletic, also known as
the “Atho- b’s.” I played for coach Jeff Hallan and Barsey, his assistant.
One day Mark and I were sitting in the library talking about football
(soccer), and we got an idea that we should try playing soccer in the
United States. So we started searching for scholarships. We gave this idea to our
respective coaches and they fully supported us, and the rest is history.
Baker– I wanted a change of culture, something different. Just like Josh,
I also played for a local football team known as the Dead Sparrow.
I passed this idea to two people, “Winky Boy,” (who was held in high
regard at Dead Sparrow) and Errol Patel, (a family friend who was associated with football and whose nickname was“Patel-ster”). They both fully
supported my decision and helped me in every way possible to make my
desires come true.
5. What are your nicknames back home?
Baker– My nickname back home is “Wigan Chris.” I got this name because
one of my friends always called me “Chris” because he did not know my real
name for the longest time.
van Allen– My nickname back home is “Muffler.” I got this name because I
always wore earmuffs because of the cold. I even wore them around the
house. We also have a friend whose nickname is “Pricey.” We gave him this
nickname because whenever we played football (soccer) he always wore the
most expensive soccer boots (cleats).
6. What has been you best experience in the U.S.?
van Allen– My best time is probably the second semester at my previous school in
Illinois. I visited Mark who was just one hour away from me.
Baker– I agree that was a fun time, but my best experience thus far was
our trip to Florida during spring break with our friends, “Jambo,” “Borris,”
and “Mr. D.”
7. What are your future plans if any after college?
Baker– Before coming here, I had an internship with Roger Simms (a
successful butchery in England) as an accountant. If I were to go back I
would become a partner with the owner, Roger Simms. I would also help
with my dad’s property letting firm called Bozza’s Nobheads.
van Allen– I also had a job before coming here, I worked as a manager for a
large convenient store known as Jim & Janes. I would work there again
as manager if I were to go back.