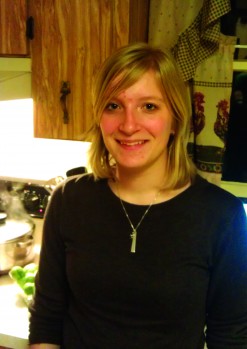 This year I finally had the opportunity to live off campus, which really is quite an achievement here at Goshen College. Unless you have enough credit hours to graduate, live with your parents, are 23 years old, are married, attend school part-time or have children, you’re stuck on campus. It’s a bizarre concept to my friends at other colleges and even to my parents, who were reluctant to send me here because they felt I wouldn’t be prepared for life after college with such a sheltered system.

And it’s true; finding a house to rent, paying bills, repairing appliances, dealing with neighbors, cooking meals, cleaning a house, etc. are all things that take getting used to, and I’m glad I was able to do it in the company of friends while still able to take college loans to cover costs if I needed to, which I didn’t. Last year I paid $1,147 per month for room and board through the college, and that was only two meals a day, cramped into a small Kulp apartment. Now I pay $300 to rent a whole house and yard, pay utilities, and eat three healthy, home-cooked meals a day.

Goshen College claims that it wants its students to remain on campus to build a community. Since living off campus, I do agree that I feel less a part of the campus community, but as a senior I doubt I would have taken part in many more GC events had I lived on campus. However, being apart from the college has opened my eyes to how oblivious and detached all Goshen College students are from the larger community. Unless they are involved in a church or on a snack run to Wal-Mart, they don’t really interact with actual Goshen inhabitants.

I had the unique experience of student teaching at Chandler Elementary this fall, and before the school year started we visited the homes of all our students. I had not really understood how separated I was from the people around me until I began to realize that there’s a whole world out there: a poverty that I had underestimated, a culture that I had been oblivious to and a world outside of the sheltered island of Goshen College.

And that was just the beginning. My refreshing wake-up call made me all the more eager to immerse myself in this newfound place and to get away from the stale, forced “community” of campus life. I started talking to my colleagues at the school, customers at my job, people that run the shops downtown and neighbors on my street. Not just to be polite, but to really talk to them. I discovered that there’s so much more to this place than a movie theater that doesn’t run shows past eight and a Taco Bell four minutes down the road. I came alive again, picking up old hobbies. I found a place to go horseback riding, trails for cross-country skiing, and new places to go out to eat. I know all about my neighbors’ grandkids, the best places in town to do Zumba, and the struggle of jumping a car in a blizzard.

So yes, I guess living off campus means it’s harder to just drop by a friend’s room down the hall or walk over to Umble for a theater showing, but it also means I’m truly part of the fascinating community around me from which I’ve been isolated for three years. I finally feel like this place called Goshen is my home.