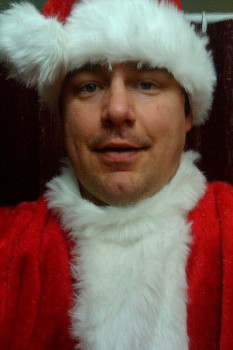 Tiny presents wrapped with string, full of toys and trinkets among other things. While the children await for that special night, Santa Samuel would soon take flight. But not by plane, train or sleigh led by deer, but a car and a suit to visit all he holds dear.

Jason Samuel, professor of communication, has a yearly tradition that brings joy to family, friends and strangers. Those acquainted with Samuel know him as boisterous, friendly and more energetic than the average 41-year-old. Although he does not have a white beard, these notable qualities have since made him a perfect match for his time dressed up as Santa Claus.

Samuel first put on the Santa suit at the age of 20. He was working at the South Side Soda Shop, a diner located on South Main Street, when his boss asked him to greet children in a Santa suit. Since then, his reasons for putting on the suit are more elaborate and his dressing up has become a family tradition.

“There are two types of Santa periods in my life,” Samuel said. “The South Side Soda Shop Santa, which that was more of a marketing thing. But the new Santa is a bigger deal. The primary purpose of me dressing up as Santa Claus is to go see my nieces and nephews. But I’ve also gone to see friends and kids, and I even went and made a special trip to see Pat Lehman’s son who was, at the time, living in Philadelphia. So I’ve crisscrossed Philadelphia dressed up as Santa Claus with a bag.”

Just in time for December, Samuel sends a stuffed elf with long arms and legs to his nieces and nephews. This little elf’s job is to watch over the children from the shelf it sits on.

“Every night the elf comes all the way to the North Pole and tells me if they’ve been bad or good,” Samuel said. The children come home after school and search for the elf that, with the help of their parents, moves around the house to different locations to hint at its life-like role of keeping an eye on their behavior as to report back to Santa Samuel.

“I write them each personalized letters with details about what they’ve been doing all year long,” Samuel said. “Thank you, Facebook. And then I tell them what their gifts are and include special instructions.”

Some of these special instructions include a verse the children must recite as they sprinkle magic reindeer food on their lawn to attract Santa’s sleigh. Samuel assembles and mails packets that contain a mix of oats for the reindeer to eat with gold and silver glitter to catch the flying deer’s attention.

His three nieces and four nephews, who range from 3 years old to 7, buy into the Santa act. His interactions with them may not seem all that surprising since they are young, but the reactions from adults may seem a little more peculiar.

Before walking into a grocery store, a man came over to talk to Samuel, who was dressed as Santa. They began to have a conversation when Samuel joked with him, “Have you been naughty or nice this year?” The man proceeded to tell him that he just got out of prison and was going to celebrate the holidays with his family.

“People are always honking at me when they’re driving in their cars. Lots of old ladies flirting with Santa. Everybody loves Santa. You get special privileges too. I’ve gotten to move to the front of lines with the Santa suit at the grocery store or bakery or getting gas.”

While Samuel does enjoy “messing with strangers” while dressed up as Santa, his joy and time commitment to the yearly job comes from the reactions of his family, who ultimately provide him with every Santa suit he has worn.

“When I put that Santa suit on, it’s like a magic spell comes over me,” Samuel said, as his wife Jenni and a group of colleagues who gathered at his office door began to laugh, noting his sarcastic humor. “I mean, it’s like the spirit of Christmas washes over my body and I am Saint Nick incarnate. I can’t help but spread Christmas joy to all the boys and girls.”

Although Samuel admitted his somewhat cheesy tone, he later said, “It really is about the spirit of Christmas. It can make you feel good. When you’re Santa, everyone wants to say ‘hi’ or give you a hug or hang out. There are very few people that are mean to Santa, especially on Christmas Eve when I arrive at my family’s house in Philadelphia. So everyone is in the spirit of Christmas.”

Samuel says he will keep up the Santa act “as long as people will continue to invite Santa into their homes,” or at least until the children are older. There may be another Santa period in his life a few years down the road, but for now Samuel will be the children’s real-life Santa Claus.

“The kids get a kick out of it and that’s why I do it,” Samuel said.