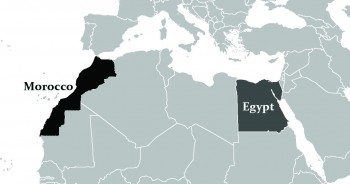 At the beginning of 2012, the decision to discontinue the Study-Service Term in Egypt was made official.

Tom Meyers, director of international education, and the International Education Committee knew they needed to come to a conclusion about the safety of sending students to a nation in the midst of revolution by the beginning of the new year.

Starting last January, thousands of Egyptians took to the streets to protest government corruption, unemployment and poverty. Within months, the people overthrew a president who had been in power for 30 years. Various reports have speculated that the death toll within the first months of the revolution reached upwards of 800 individuals.

The fact of the matter is, in the opinion of the International Education Committee, that Egypt’s future stability is simply too uncertain to send an SST unit there.

The question to be answered now is, of course, where can Goshen send an SST unit this coming fall? The answer: Morocco. Morocco is located in North Africa, with its capital about 2,000 miles away from Cairo, Egypt. The capital, Rabat, is currently the likely study location for the group of Goshen SST-ers.

Like Egypt, Morocco is predominately Muslim, and its official language is Arabic. However, French is also spoken across Morocco in business, government and diplomacy. Morocco is a constitutional monarchy, meaning that they have a king, a prime minister, a bicameral parliament and a Supreme Court. In late 2010 and early 2011 Morocco underwent a similar revolution to those in neighboring nations, including Egypt, but its was more subdued. As a result, the king promised significant reforms that may bring change to the distribution of power among different branches of the government.

This is the culture into which students now plan to be immersed this coming fall. While aspects of Moroccan life mirror those of life in Egypt, the three-month stay will undoubtedly be a quite different experience. While those enrolled in Egypt SST felt disheartened by the initial announcement that the trip was cancelled, they acknowledge the reason behind the decision and the eye-opening experiences to be had in Morocco.

Furthermore, the decision didn’t come as a shock to most. Stuart Graber, a sophomore, said, “I kind of saw it coming. [Earlier in the year] Tom Meyers said he was going [to Egypt] later in the semester and would come back and decide if it had chilled out. It didn’t.” He added, “I’m disappointed. I thought it would be a really cool experience to talk with the people living in Egypt and hear what they had to say about the uprising. I’m still really excited; it’s just going to be different.”

Austin Sprunger, a junior, holds a positive view of the decision. He said, “I trust that Tom Meyers wouldn’t have gone through all of the work to arrange another SST location without good reason. I think that Morocco will be a beautiful country with a very interesting culture, and it will be cool to be the first SST group that gets to go there.”

This will be the first unit to go on SST to Morocco, though Dean Rhodes has taken two groups to Spain and Morocco during past May Terms. The connections formed there will hopefully assist in a smooth and speedy process of establishing host families and service positions in the new location.