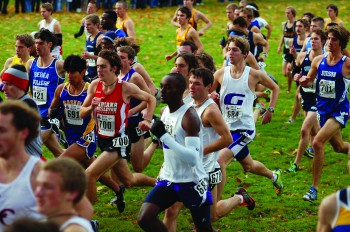 On Nov. 19, sophomore Oscar Joses Kirwa and first-year Jordan Smeltzer traveled to Vancouver, Wash. to compete in their first career national championship race. Kirwa and Smeltzer advanced to nationals after they placed sixth and seventh, respectively, at the conference championship on Nov. 5. In Vancouver, the men were up against 300 of the nation’s best competitors. Kirwa crossed the finish line in 25:49 to place 108th, and Smeltzer finished with a time of 26:01 in 131st place. The winning team was Oklahoma Christian University, with 93 points. Sophomore Kennedy Kithuka of Wayland Baptist University was the first to cross the finish line in 23:15. Shaving nearly a minute off his time from the previous year, Kithuka took home his second straight individual championship.

The course was tough for beginners Kirwa and Smeltzer, but the pair placed third and fourth among other conference competitors.

“The race was pretty competitive because a lot of good participants were struggling for space,” Kirwa said. “The course was muddy and hilly in some loops. Each loop is 2 km and we went through the same route 4 times for a total of 8 km.”

Kirwa and Smeltzer ran together for the majority of the race. “It was fun because we ran together in a pack of athletes and I only made a move beyond Jordan’s pace at the last half mile,” Kirwa said. “Running with Jordan before was great because he runs with determination and take practices seriously, that makes running more lively.”

Kirwa hopes to improve his time to 24:25 before the conference race next year. In order to set the team’s pace at the head of the pack, Kirwa has plans on what he and the team should do so they all can advance to the championships in 2012.

“I hope to attend every practice and lead by example,” Kirwa said. “I also want to run my best times and encourage everyone to do the best they can to compete since they have the potential to do great. They have to train and run as if they are national champions. I would encourage my teammates to be more disciplined and determined in running; they should do more physical fitness beyond practice in a smart way and pay serious attention to coach’s advice.”