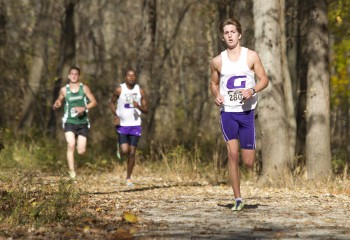 Goshen College hosted the regional cross-country competition at Shanklin Park on Saturday, where the men trailed only four points behind first-place finisher, Huntington, which meant losing their automatic entry to the national championships. Until Monday, the men’s cross-country season appeared to be over, but due to their high performance, two members of the men’s team will travel to Vancouver, Wash. to continue their 2011 season.

First-year Jordan Smeltzer and sophomore Oscar Joses Kirwa will represent Goshen College on Nov. 19 at the Fort Vancouver Historic Site. Kirwa placed sixth in the regional match with a time of 25:30.9 and Smeltzer followed close behind with a time of 25:37.6 to place seventh.

According to Smeltzer, the men knew they would have to fight Huntington for the win. Although they were a few points behind, nine Maple Leaf runners improved significantly in personal bests, including Kirwa, who shaved more than a minute off his best time. Despite breaking the cross-country program’s fastest first-year time, Smeltzer was unsure about making it into nationals so early in his collegiate career.

“Right after the race I really didn’t think I made it individually,” Smeltzer admitted. “I must have miscounted the people in front of me. I didn’t realize I made it until a few minutes later, my girlfriend, [junior] Erin Helmuth, came over and told me the good news. I really didn’t believe her at first. The whole thing was very surreal to me because I knew it was a long shot for me to make it as a first-year. I hated the whole waiting around part for the results. I was more nervous after the race then I ever was before the gun went off for the race.”

Waiting for the results on Saturday was not the only period of anticipation for Smeltzer. Goshen College still had a chance to advance to nationals with enough bids from other coaches in the region but had to wait until Monday afternoon to see if their season would continue. Although the whole team will not be joining him, Smeltzer is excited to represent the Maple Leafs.

“Making it to nationals was the best feeling in the world,” Smeltzer said. “It was like putting the icing on the cake for the end of the season. It will be a great honor to represent Goshen College in such a big race. It is also exciting that we get to travel all the way to Vancouver. The only thing that would make the trip better is if I had the whole team coming with me.”

Kirwa will join Smeltzer in the National Championships—a partnership that Smeltzer believes will yield good results.

“I am so glad that Oscar will be going with me,” Smeltzer said. “Oscar is a great runner and a great friend. Oscar has consistently improved every race of the season and it is a lot of fun going back and forth with him in the races. After the race we were already planning out race strategies to break the school record at nationals. Oscar and I will have a great time in Washington.”

Smeltzer and Kirwa will prepare for nationals by going on 10-13 mile runs mixed with speed work. Next Thursday, the two men, along with their head coach, Doug Yoder, and assistant coach, Justin Gillete, will travel to Washington to run the course in preparation for next Saturday’s race.

Although the season is over for the rest of the Maple Leaf runners, nine of the top finishers, including Daniel Zelaya, Jacob GunderKline, Andrew Witkowski, Moses Kaelo, Alejandro Rodriguez, Brock GunderKline and Tijs Buckermolen, will return next year. This young team has room for improvement and things look even brighter for the 2012 season. With Smeltzer and Kirwa leading the team, the 2011 season will likely prove to be a starting block for the next years to come.