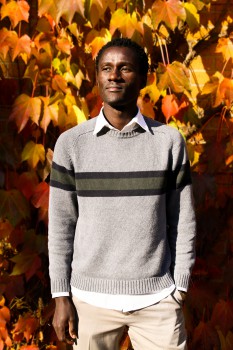 Born in the Ivory Coast, Madi Ouedraogo spent his childhood years in a family of three brothers and four sisters. He came to Goshen College on a Fulbright scholarship in 2010 and is currently a leader of the International Student Club and part of the GC soccer team. He hopes to use his major in Teaching English as a Second Language to become a teacher in Burkina Faso, a landlocked country located in Western Africa.

·  The official language is French, but the most widely spoken is Mooré

·  The area of Burikna Faso is 105, 869 square miles, which is almost the same size as Colorado

· Round trip from Chicago to Ouagadougou costs around $1600

1.  What is considered one of the most significant customs or celebrations in Burkina Faso?

One holiday we celebrate in Kaya, my dad’s province, is called Napusma which means “greeting the king”. In every village we have people we call kings, the traditional chiefs of the village that people really respect. Towards the end of October, people throw a big party to greet the king. During the celebration, the people usually kill an animal, a cow for example, dance and drink wine, beer or Zumkum.

2.  What is your favorite food and drink from Burkina Faso?

People eat a lot of rice, beans and corn. Those are the three things we grow the most. In the capital, people usually drink water. For special occasions like weddings, and important guests, we serve Zumkum. This is a home-made drink made of millet powder and sugar. It’s very good.

3.  What are some of the most popular places to visit in Burkina Faso?

4.  What would your typical day look like in Burkina Faso?

On a typical day in the capital, you would see a lot of people rushing on their motorbikes. People in the city try to make money so they work a lot.  We usually buy our rice and beans meals from the ladies on the street who sell them. Most of the families don’t sit together for a meal but eat on the go.

·  This country was formerly known as Upper Volta and was renamed to Burkina Faso in 1984.

·  People are scared of rain more than anything else. When it’s raining, everyone tries to find a shelter.

· Respect is very important when communicating with elderly people. When greeting someone who is older, the person is not supposed to shake hands until the older person reaches to say hello. In addition, if that person is sitting, the younger person should kneel and greet the older one.