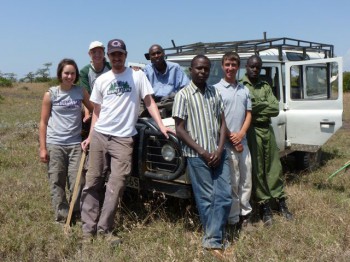 Imagine a summer spent flying over the tops of trees in a savannah, watching elephants, zebras, giraffes and hyenas pad the grasses below. For four Goshen College students and one professor, this past June provided an opportunity to do just that.

Ryan Sensenig, an associate professor of biology and field research, led a six-week trip to Africa, with Luke Zehr, a junior, David Stoesz, a senior and recent graduates Tori Yoder and Laura Schlabach. The trip was a follow-up visit for Sensenig, who had done previous research in Kenya and had been planning to take students along with him for several years.

“I did my dissertation research in Kenya trying to understand how prescribed fires in savannas might help promote the diversity of large grazers we see in these systems,” said Sensenig. “The trip was to collect more data from a set of burns I completed in 2005 and 2006.”

Zehr first heard of the opportunity as a freshman, when he began working with Sensenig on the prairies at Merry Lea.

“For a few years, the idea had been planted in my mind,” said Zehr. “I had been to southern Africa before and had fallen in love with what I had seen of the country. I wanted more of it.”

Schlabach also thought it was an incredible opportunity and jumped at the chance when spots became available.

“A huge draw was working alongside Ryan and a team of fellow students and being in the amazing landscape of the Kenyan savannah,” said Schlabach. “International travel has always been a passion of mine, so to combine it with research was pretty much a dream.”

Sensenig, his wife Donna, and their two children, Mara and Isaac, began preparations in Laikipia, Kenya in May, while students arrived at the beginning of June. Home base was at the Mpala Research Centre, perched in an elevated savannah near Mount Kenya. It didn’t take long for the excitement to begin.

“Our very first night at Mpala Research Centre a pride of eight lions came into the compound and killed a waterbuck, coming within meters of our house,” Sensenig said.

The group began their research under a very intense sun. Sensenig was looking at the heterogeneity that prescribed burns can create in wildlife and acacia tree demographics, with students specifically collecting data on the acacia trees. They returned to areas of the savannah which Sensenig had burned in a controlled way.

“While one team of Kenyan field assistants collected dung samples to look at which different animals were choosing to graze in burned areas and non-burned areas, we used belt transects to measure diameter, height and whether we saw elephant damage on the trees,”  Schlabach said. “We also did our best to identify species of ants. I was grateful that our mindset was trying to collect data efficiently, but also taking the time to appreciate the beauty around us.”

A typical day included waking at six, eating breakfast at the center and then driving in a Landrover anywhere from half an hour to two hours to get to a research plot. The group would go onto privately-owned properties and find stakes marked from six years ago in order to conduct their research, then return by seven for supper. A favorite meal of Zehr’s was chapati, a fried flatbread served with lentils.

At the Mpala Research Centre, the group was exposed to many different research projects and teams. They got to know students and professors from Princeton, Columbia and UC Davis. They also met a Kenyan research assistant named John and Duncan, a Kenya pHD candidate, both of whom had worked with Sensenig in the past. “One of the most important things I learned was what an interactive community scientists are,” said Zehr. “It is important to have good collaborations. I learned how exciting research can be – it can take you anywhere in the world.”

While the group worked intensely for six weeks, collecting data for over 13,000 acacia trees, they also left time to enjoy other aspects of Laikipia, in particular the many wild animals that roamed the land.

“Research in the wild spaces of Kenya creates some unexpected events,” said Sensenig. “One day our Landrover started to get bogged down in the mud, so we decided to walk to our field site. As we came around the corner, we were greeted by a lone male elephant who had claimed the road as his own.”

Schlabach said, “I loved hearing hyenas ‘whoop’ at night as I was falling asleep and although we saw them daily, the beauty of zebras romping, elephants foraging and giraffe necks popping up out of trees never ceased to amaze me.”

One of Zehr’s favorite memories was seeing the savannah from the sky.

“We got to take a flight in a small four-seater plane to take pictures of plots,” said Zehr. “The doors were taken off so the plane was completely open and it was really fun to fly 40 meters from the tops of the trees.”

The summer also reminded Schlabach of the beauty and intricacy of ecology.

“I realized yet again how important it is that we work to conserve our natural world and resources, said Schlabach. “Not just for ourselves but also for organisms and species that must coexist in healthy ecosystems.”

The trip to Africa was a beneficial one for all involved and Sensenig hopes to return in the future.

“I feel it is important to provide undergraduate students with research opportunities, particularly in the developing world,” said Sensenig. “I plan to offer additional research and teaching opportunities in Kenya in the summer of 2013. Having been born and raised in Kenya for a part of my life, there is a chronic itch to return.”