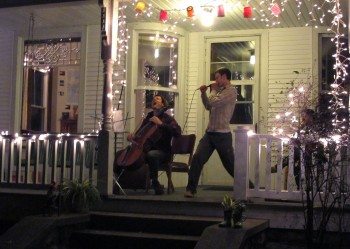 For residents of Kenwood house, hanging out on the porch and singing songs has been a common occurrence during the first half of the semester. But it was Lydia Yoder, friend of Kenwood house and resident of neighboring Howell house, who suggested that a more formal porch concert be held. On Friday night, Kenwood’s wrap-around porch was transformed into a full venue for one night of “Porchapalooza.”

Michael Miller, a junior resident of Kenwood, did most of the coordinating for the event. He sent out “personalized mass emails” to musicians across campus, encouraging their talents and inviting them to participate in Goshen College’s first porch concert.

By Friday night at 9:30, Kenwood had become an outdoor concert hall. A door, propped up against the house mailbox, read “Porchapalooza” in large, colorful letters meant to “symbolize the open invitation to come on in,” said Becca Yoder, a resident of Kenwood and coordinator of Porchapalooza. The porch was lit with strings of hanging Christmas lights and a number of colorful lanterns. A table was set up to the left of the stage with pumpkin desserts, bread, fruit and apple cider for guests to enjoy while they sat on the blankets and couches provided for seating.

Audience members were made up of underclassmen travelling from warm dorm floors, upperclassmen from campus houses or apartments and even some community members who came out of interest.

“We counted almost 160 people during the first half,” Yoder said. “All years were represented and brought out the talents of all the years.”

Though Porchapalooza was a concert, the organizers at Kenwood house tried to create an atmosphere where anyone would feel comfortable performing.

“The level of perfection was low,” said Yoder. “It wasn’t a competition.”

All 13 acts that appeared on the original set list, in addition to some impromptu ones, brought a diverse blend of musical talent to the stage. Sitars shared the stage with old-time blues bands. The “Shag Haus Shuffle” debuted the hip-hop talents of Miller I quad sophomores Stuart Graber, Jon Hersherger, Andrew Glick and John Miller. Siblings Justine and Ted Maust performed a ukulele duet to a rendition of Slow Club’s “Doesn’t Have to be Beautiful” and Adama Millogo amazed the crowd with a rap in his native French with Tupac’s “California Love” backing him up.  The hour and forty-five minutes of performances, concluded with the Kenwood house members singing a fond goodbye to audience members with the Sound of Music’s “So Long, Farewell.”

“I loved the variety at Porchapalooza,” said Miller. “From first-years on hammer dulcimer, sophomores with bread pans and sick beats to seniors with banjos.”

The success of Porchapalooza has led house members to begin tentative plans for“Kenwood Stock” this spring.