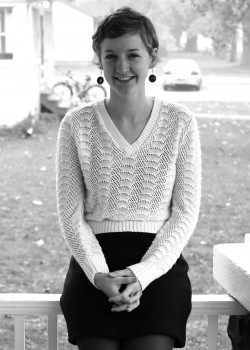 There are many signs that it is Domestic and Sexual Violence Awareness Week on our campus: the Clothesline Project in Schrock Plaza, the forum about global women’s issues, the men’s summit, the candlelight vigil, and the traditional Take Back the Night walk. The goal of this week is to raise awareness, educate and come together in solidarity with those who have experienced domestic and sexual violence and assault. This awareness campaign aims to involve everybody, both those who have experienced some form of domestic and sexual abuse and those who find this week to be confusing or even uncomfortable.

Looking around, I am struck by the fact that there are a variety of reactions to the events on our campus this week. For example, during Kendra Yoder’s convocation about sexual violence on Monday, a group of people sitting in the back began talking out loud while she spoke. I was unable to hear what they were saying; I do not know if they were responding to the presentation. For all I know, they were talking about the weekend and making lunch plans. It is difficult to practice proper audience etiquette when you are sitting by your friends in a place you may not want to be. I get that. In any case, I was uncomfortable because I had never heard such disregard for a speaker during convocation. I was confused about whether or not their conversation related to the content and if it was playing into the tendency to dismiss or reject the idea that domestic and sexual violence is pervasive in our culture and exists here at GC. I wondered if this hinted at an attitude about gender and violence that is present on campus.

I generally don’t think that GC is a place of fear. The day-to-day environment feels safe and unthreatening. Although our campus has experienced heightened security in the past year because of several events, I walk through my days with caution, but not fear. I do not worry about being sexually assaulted while walking to my house at night, nor do I feel threatened by other campus or community members. However, I identified with Yoder’s list of things that happen on an ordinary basis: the jokes, the tasteless language, the uncomfortable physical attention. When there is an opportunity for people to talk, I find that almost everyone has experienced or knows someone who has experienced these things. Individually, these things are not necessarily considered wrong or sexist, but when they accumulate and go unquestioned they create an environment that makes sexual assault, harassment, violence, and verbal and nonverbal abuse “okay” or unimportant, no matter how big or small the offense may be.

What I heard during the side conversation during convocation was the sound of people saying these issues don’t matter or that they don’t pertain to us. Perhaps the talking during convocation suggested that even a discussion about this subject is trivial. This is problematic because we are a community of people, and everyone is co-existing with others on this campus who have experienced sexual assault or violence on some level, whether individually we feel like it is a legitimate issue or not. Domestic and Sexual Violence Awareness Week is designed to raise campus and community awareness about these issues. It’s not asking for everyone to go to convocation, or to participate in the men’s summit or to walk during Take Back the Night. This week is about respecting those who have experienced domestic and sexual violations and offering spaces to move forward with that knowledge. Disrespecting these events devalues the issue. It disrespects the violations some people have experienced, whether it was an offhand sexual comment, verbal abuse or rape. Most important, it can perpetuate a climate of fear and mistrust about sharing our experiences and moving toward healing.

Although we all have different attitudes about gender and violence, we are obligated, as always, to give others respect at its most basic level. We must recognize that everybody’s rights, bodies and stories are just as legitimate as ours, and put effort into offering our respect and support. There are hopeful conversations happening on campus as well, conversations that involve hearing each other and asking questions in a respectful way. This is a sign that there is a desire to learn about and understand other people’s experiences and stories, which will result in the changing of attitudes both here on our campus and in our broader community.