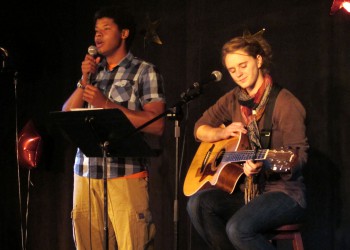 The Black Student Union (in congruence with Latino Student Union and International Student Club) hosted a talent show and dance on Friday evening.  Over one hundred audience members packed into Newcomer Center 19 to witness the diverse blend of talents Goshen has to offer. The show, in addition to being a collection of musical and literary acts, was put on in part to benefit Invisible Children, an international fundraising campaign for the emancipation of child soldiers in Uganda.

“The talent show was originally an idea that was addressed to MAO (Multicultural Affairs Organization),” said Bojana Jankova, a junior member of Student Senate and MAO. “Sophie (Metzger, MAO sponsor) helped with the idea of making this a fundraiser for Invisible Children. So then we contacted members of the Invisible Children group and that’s how the idea was born for a fundraiser at the talent show.”

The evening was opened  by students Sandrine Sandrali and Elizabeth Lagan giving information about the intent of the fundraiser. This was followed by the acoustic and vocal talents of Anna Loucks and Ashley Fehlberg. The night continued with a variety of musical acts including a rendition of Coldplay’s “Scientist” sung by Peter Gary and accompanied by Brook Hostetter and Erin Helmuth. Jenica Corbett read an interactive eulogy for Professor James S. Miller in which students were invited to respond with the phrase, “We are Goshen College.” Billy Funk and Sam Weaver performed an energetic tap routine and Vasti Rosado entertained with a traditional Puerto Rican dance. Mohamad Meissara ended the show with the grand finale by reciting the children’s rhyme “I Know an Old Lady Who Swallowed a Fly.” Afterwards, members of BSU invited the audience to stay not only for the dance, but also for a viewing of the documentary “Tony,” produced by Invisible Children.

In September, members of Invisible Children came to Goshen College Campus to advocate for their cause at a chapel.

Sandrine Sandrali, a sophomore from Rwanda who helped to initiate Invisible Children’s visit to campus, has held the stories of the child soldiers of Uganda and similar stories from her own friends and family in Rwanda in her heart.

Together with fellow advocates Elizabeth Lagan, Natasha Weisenbeck, Julz Quiroz, Liz Berg and Bojana Jankova, as well as faculty advisor Becky Horst and a variety of other impassioned individuals, Sandrali helped to organize campus fundraisers. The first of these was the BSU Talent Show.

So far, the group has raised almost $200 for Invisible Children. Though they are celebrating the amount of faculty and student response, they don’t aim to stop advocating for the cause any time soon.

“This is a cause where you can do something,” Lagan said. “Invisible Children has made it really easy for a student to make a huge different in someone’s life.”

The other campus organizers are inviting all students to become a part of it as well. They are tentatively planning on selling t-shirts, drinks at java, and are currently accepting donations for the cause via a collection box on Student Life secretary Shirley Shriner’s desk.

This is an organization that focuses on those things that (Goshen College) stands for,” Weisenbeck said. “And though we will not be there in Uganda interacting with people, we can use our own talents and abilities to lead.”

For Weisenbeck, Lagan and the rest of the Invisible Children organization group, teaming with BSU for fundraising was one of the first steps towards making a difference.

“Truly there is meaning to this,” Sandrali said. “It’s really deep to think of other people as humans but even more to understand it and want to take action. When you know what’s going on you can be touched by it.”