Tragic loss for the Goshen community 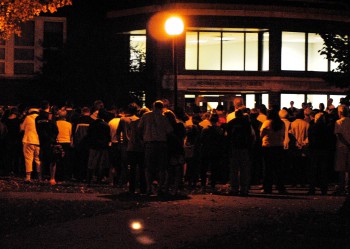 Goshen College mourns the death of Dr. James Steven Miller, biology professor for 30 years, who was attacked in his home early Sunday morning.

Miller’s wife Linda made an emergency phone call to the Goshen Police Department at around 1 a.m. Sunday morning. She reported that she and her husband had been assaulted by an unknown attacker who had quickly fled the scene of the crime. She was taken to the hospital with severe injuries and is in stable condition as of Monday afternoon, according to the Elkhart Truth*. The attacker’s whereabouts are unknown, but he is reported to be a middle-aged white male. An investigation is currently underway to track down the assailant.

James is survived by Linda and his three children.

A memorial service was held for James on Sunday at 8 p.m. in the lawn outside the science building, where Miller worked for over three decades. Students, professors, staff and community members stood outside the building in silence as the clock tower tolled at 8 p.m.

“The tolling bells speak for us when words are inadequate,” said President James Brenneman after the bells stopped.

Bob Yoder, campus pastor, led a meditation from Psalm 137 which says, “how can we sing the songs of the Lord when in a foreign land.” For Yoder, the state of sorrow and grief that surround the Goshen community is like a foreign land in which hope is hard to see.

At the end of the brief service, people were invited to take candles and stand in silence for as long as they wanted. There was also a poster board with pictures of James Miller and a blank board upon which people could write messages. Both of the boards will be placed in the science building.

As people stood with their candles, the harmonies of “How Great is Thy Faithfulness” and “My Life Flows On” filled the air as the gathered community spontaneously sang hymns in remembrance of James Miller.

Anyone who may have information regarding the investigation is strongly encouraged to contact the Goshen City Police Department at 533-8661 or the Michiana Crime Stoppers at 1-800-342-STOP or 288-STOP.

*Editor’s note: This post was updated Monday at 7 p.m. to correct statements about Linda’s injury.