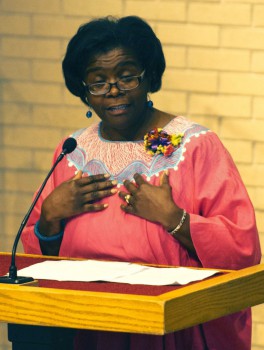 DeFehr has used his business skills to serve throughout the world, in Bangladesh, Cambodia, Somalia and Lithuania. He is the CEO of Palliser Furniture, a leading furniture manufacturer committed to environmental sustainability. Aside from his work at the company, DeFehr has invested time serving the less fortunate of the world through the Canadian Foodgrains Bank, an organization that lets Canadian farmers share their harvests with those in the world who need them, by working as a member of the World Economic Forum and by serving as United Nations High Commissioner for Refugees to Somalia.

George’s passion for music allowed him to build a successful career in music. He has conducted choirs in India and throughout the United States. Much of his work has been with the San Francisco Symphony Chorus. Under his direction, the chorus has won four Grammy awards and an Emmy Award. George now travels as a guest conductor and teaches conducting. He will come to Goshen College in February of 2012 to conduct the Goshen choirs and the Toledo Symphony as part of the Performing Arts Series.

Haile’s life was devoted to peace in Somalia and Kenya. He came to Goshen from Somalia to study economics and peace. After completing his masters in public administration from Indiana State University and a masters in peace studies from Associated Mennonite Biblical Seminary, he returned to Somalia to teach and lead international development efforts. once the Somali government collapsed, Haile worked as a peace-maker between warring Somali factions. After working in Somali, Haile went to Nairobi, Kenya where he developed a peace studies program at Daystar University.

After six years battling cancer, Haile passed away at 58 on April 26, 2011. Before his passing, he received notice that he won the award. Haile’s wife and three children accepted the award on his behalf.

Martha Haile said that Ahmed was honored to receive the award and valued Goshen College so much that “to him it was like he won the Nobel.”

She also included advice taken from how Ahmed lived his life: Be you, be hospitable and be passionate. Sofia Haile, Ahmed’s daughter, presented a poem on her father’s teachings.

The Decade of Servant Leadership Award was given to Kelli Holsopple (’99). This award for graduates whose accomplishments and contributions are worthy of recognition and happened before their 12th class reunion.

Holsopple has been working in Brooklyn, NY as a producer, actor and director of the educational outreach programs at the Phoenix Theatre Ensemble. The InFlight programs brings drama to New York City public elementary schools. Holsopple’s Evolve Theater Project is an intergenerational theater program that empowers people create plays that tell their stories. A film, “Stages,” documented the first Evolve program of older Puerto Rican women and inner-city youth.

“My plans changed dramatically at Goshen,” said Holsopple. She had come to Goshen to study to be a nurse midwife, but was compelled to reconsider when she heard the saying, “The place where God calls us is where the world’s deepest need and our deepest joy meet.”

A professor helped her realize that working with young people could be like midwifery.

“I could help them give birth to their ideas,” said Holsopple.

Marty Gaff (’71) and Mary Sutter (’80) both received the Dr. Ruth Gunden and Dr. Roman Gingerich Champion of Character Award. This award is given to a male and female alumni athlete who has exemplified the college’s core values.

Gaff has taught and coached at elementary and junior high schools in Goshen. And moved to Kouts, Ind. where he has coached and taught for the last 28 years. While teaching basketball, he has let the team in a winning record and won six sectional championships and two regional championships. He has the most career wins of any boys’ basketball coach in Porter County.

Sutter uses her degree in medicine to offer health services to patients with limited resources. After earning her doctorate, she worked at a community health center in Indianapolis, Ind. with patients to have limited health resources or no insurance. She also worked at a homeless initiative where she treated patients with mental illnesses or drug addictions. Sutter has been to various health-related organizations and community health centers where she treats everyone who needs her care. She currently lives in Arizona, and works with immigrant patients at the Yavapai County Community Health Center.