Creating community around a canvas 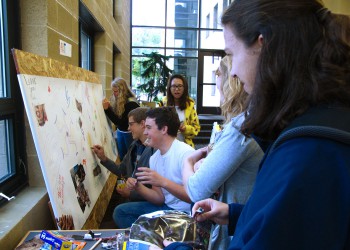 Anyone could have grabbed a marker, colored pencil or crayon and contributed to the large poster in the Connector on Friday and Saturday.

The Goshen College Art Club organized the supplies for this community project, designed to get people involved in art, even those who don’t think of themselves as artists. Even though Friday’s rain caused the poster to be moved indoors, it is full of drawings, magazine clippings and collaborative designs. The finished product will eventually be displayed in Java Junction.

“We wanted to get everyone involved,” said Justine Maust, co-leader of the art club. “We wanted to help get people over their fear of art. A whole lot of unimpressive doodles together look impressive.”

The poster project was inspired by the Menno Tea release party, where people were encouraged to draw on a white Volkswagen Beetle. By the end of the night, the Beetle was covered in doodles and Maust noticed that people liked to participate in decorating the car.

Maust and Jess Sprunger, the other co-leader of art club, wanted to plan club activities that included anyone, even those who aren’t art majors or minors.

Even at the club’s weekly meetings, the leaders plan accessible activities. Last week, the club worked on creative drawings of either a torso, head or legs and then put random drawings together to create an exquisite corpse.

The art club meets at 9:30 p.m. in the third floor of the art building.