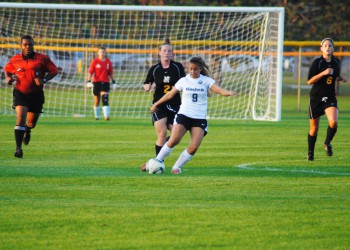 It was a cold, wet and tough game for Goshen College’s women soccer team as they dropped to Aquinas College 1-0 in a non-conference game at Goshen College.

The Maple Leafs fought hard in the first half, with the game seeming to swing back and forth between the Leafs’ and Aquinas’ control.

Aquinas had many opportunities in the first half with a free kick and two corners. The second corner connected with freshman Melissa Hogan for a goal at the 40th minute.

The Leafs also had opportunities, but could not seem to connect many shots and had one shot on goal in the first half.

The Leafs came back in the second half with a much stronger offense with two corners and a free kick, but Aquinas’ defense held strong.

When asked what were the deciding factors were for the game, Leafs’ coach Fabio dos Santos said, “We played really well tonight, but we just had a lack of attention to detail. This game should have really been a 0-0 game.”

The Maple Leafs are back in action on Saturday against Calumet College of St. Joseph at 5 p.m.