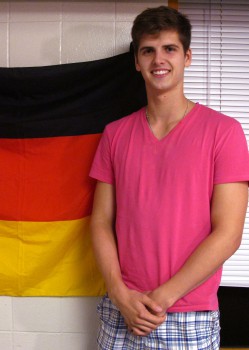 My name is Jan Zawadzki and I am a second year business administration major and global economics minor here at Goshen. I am from Germany and I was born in a town called Karlsruhe, which is about a four hour drive from the capital, Berlin. Although I was born there, I spent most of my years growing up in Berlin.

I come from a family of five; I have one brother and one sister. I arrived in the United States in 2010.

The capital of Germany is Berlin. The languages spoken are German and English. The size of Germany is comparable to the state of Montana. The cheapest round trip ticket costs about $750.

What is the most significant celebration/festival celebrated in Germany?

For us, Oktoberfest (that’s right “Oktober” with a “k”) is one of our biggest celebrations of the year. It is held in September even though it is called Oktoberfest. This celebration marks the end of the harvest. It is held in Bavaria, which is Munich. During this festival, we eat white sausage, preztels and drink German beer.

What is your favorite food/drink in Germany?

Schnitzel by far is my favorite food. It is made up of fried meat that has been marinated. It is accompanied with potatoes and green beans. Sauerkraut is also a favorite; it is basically chopped fermented cabbage.

Most popular place to visit?

The most visited site is the Berlin Wall that separated East Germany from West Germany. The kolner-dome in Cologne is also popular among tourists. It is one of the world’s largest churches and the biggest Gothic church in Northern Europe. Another famous site is the Wartburg Castle, which is famous because it was there that Martin Luther translated the Bible into German, which was the first time this was done.

Another popular place to visit is the coast of the Baltic Sea. People go there to bathe because it is said that the water has therapeutic properties.

What does a typical day look like for you?

My typical day would be getting up in the morning, having breakfast, and meeting with my friends later on. We normally would go play street basketball at a famous spot where some professionals sometimes come and play. We would also go to the Alexanderplatz, which is a big mall. Our day would end with us going to the beach at the Spree, which is a river that cuts across Berlin.

We have the biggest population out of the EU members.

Albert Einstein and Guttenberg both come from Germany. Guttenberg is credited with inventing the book press.

We had the highest paid sportsman ahead of Tiger Woods. His name is Michael Schumacher; he is a Formula 1 driver.

We are famous for the autobahn roads, which have no speed limits and you can drive as fast as you wish.