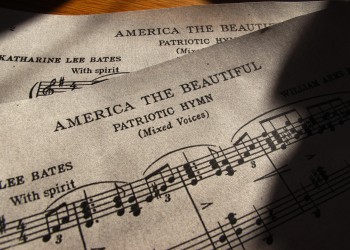 The time for talk is over. Now it’s time to sing.

In response to the discussion about whether to play the national anthem, the Board of Directors and President James E. Brenneman chose the alternative of “America the Beautiful.” According to their joint letter on the decision, that song “fits with sports tradition, honors the country and that resonates with Goshen College’s core values and respects the views of diverse constituencies.”

For the last year and a half, the Goshen College community has been having a conversation that attracted national attention. It began at the request of students asking to begin athletic events by playing the traditional pre-game song. The college conceded to playing an instrumental version followed by the prayer of St. Francis of Assisi. The decision was followed by more conversation and a change of direction.

Since the initial decision to play the anthem, President Jim Brenneman and the Goshen College Board of Directors have initiated conversations with students, faculty, and community members in order to reach an agreement. Dialogue sessions have been organized on and off campus, call systems have been made available through the switchboard, and web pages have been designed to inform the public about the on-going conversation and decision.

“We are striving throughout this to be open,” said Jodi Beyeler, director of news and communications and assistant director of public relations. Part of her job is to listen to the opinions of students and community members. For the past few months, she and fellow staff members have been receiving a large number of phone calls and emails concerning the decision. “There is not a lack of information for people who want to learn more,” Jodi said.

Brenneman wants the GC community to move forward following the decision to play “America the Beautiful.”

“I hope that we have grown a step closer to one another in spite of our differences,” said Brenneman. “The next step is to understand how we relate to each other when we disagree. If nothing else, we now know more about each other that we would not have otherwise.”

President Brenneman and the Goshen College Board of Directors said in their August 19 letter  that the decision to celebrate the nation by playing “America the Beautiful” before sports events will give an opportunity for the GC community to respect all views.