Softball team off to great start after extended break 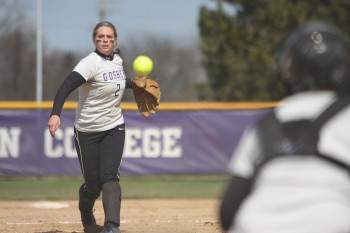 The Northern Indiana weather and game scheduling can be blamed for the long break in softball action, but this did nothing to deter the Maple Leafs as the softball team swept Grace to start off conference play, as they hosted Grace College in a double header for the Goshen home opener last Tuesday, March 29. The Maple Leafs swept both games to advance their record to 6-5, 2-0 in the Mid-Central College Conference.

The first game started with Grace taking an early lead as the Grace Lancers got one run in the top of the first. The Leafs were able to catch up in the first thanks to a run scored by Stacey Klein, a sophomore.  Goshen took small steps to advance their lead early in the game and thanks to a good sixth inning that saw three Maple Leafs score, putting an end to the game. Junior Jessica Reed’s pitching was instrumental to the team victory by only giving up three hits and striking out seven players.

The second game came down to the final inning, where Goshen was able to pull ahead by one point to win the game. The Maple Leafs took the lead in the first inning, but after an exciting third inning that saw both teams score three points the game returned to a tie setting up for the exciting end in the seventh. The team was led in runs by Kat Berg, a sophomore, who scored two runs to lead the Maple Leafs.  Maria Koshmider, a sophomore, pitched four shutout innings on her way to her first win of the season.

The Maple Leafs will face off against Indiana Wesleyan at home on Thursday, March 31 in a MCC conference game at 3 p.m.