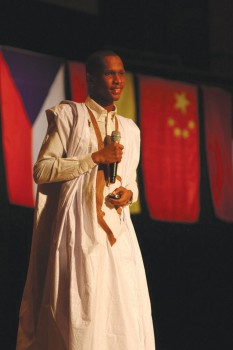 When he decided to attend a college that claims “global citizenship” as one of its core values, Mohamed Meissara, a sophomore from Mauritania, didn’t envision himself sitting at a cafeteria table composed only of other international students. But Meissara—and others, too—claim that there is a divide between American and international students at Goshen College—and so they met recently to discuss this disconnect.

Eight percent of students at Goshen are internationals who come from over 40 different countries around the world. When SaeJin Lee, a senior Korean-American, organized a meeting for international students to discuss their experiences, Lee said there was a common sense of frustration from everyone and a common lack of personal interactions with non-international students.

“I hang out only with internationals,” said Meissara, “because I don’t have any close American friends.”

Meissara explained it as a cultural chasm; he said that American culture is more individualistic—more aloof—than many of the cultures that international students at Goshen come from. When he is walking down the sidewalk and sees an acquaintance, he expects him or her to acknowledge him and is often put off when Americans don’t. This difference in cultural expectations can create miscommunications between international and American students, Meissara said.

Lee said that many of the floor activities she attended when she lived in the dormitories were confusing to her because she didn’t understand them.  She gave the example of when her floor went to a corn maze (something common mostly among Western cultures), she was encouraged to attend, but no one ever explained to her what a corn maze was or why they were going.  Lee explained that most American students aren’t aware that international students come from different social backgrounds, and there isn’t a clear educational channel from the college to explain this difference.

The concept of honor and shame is another aspect of Lee’s (and many other international students’) culture that has given her some difficulty.  She said it has been difficult for her, as a student, to reach out and ask questions to professors (her “elders”).  While she said they didn’t intentionally make her feel shameful, she still felt she needed to be extra courageous to reach out to them.

“Each of us thinks that the other is not open. So the college can do something that bridges the gap between us,” said Meissara.

The group that met to talk about international integration at Goshen devised several ideas for how to accomplish this goal. One proposition was to hold a special day for every continent represented on campus every year; another was to pair each international student with one or two Americans.  They also discussed the fact that there aren’t many avenues for international students to voice their frustrations.

Living situations also factor in to the opportunities for international and American students to interact.  Lee mentioned that the fact that many international students live off campus with host families makes it even more difficult for them to connect with American students.  By the time students get back from their Study-Service Term and are more aware of cultural differences, they are normally juniors or seniors and living in small-group houses or the apartments, giving them less opportunities to interact with international students. Going beyond having a talk about race for an afternoon on Martin Luther King, Jr. Day, students should be building relationships among their international peers, said Lee.

“Change needs to happen on both a relational and institutional level,” said Lee.  “I’m glad I’m able to voice my side of the story, but I’m graduating soon.  I hope that the remaining students go beyond tossing around ideas and are able to begin implementing some of them.”