From diesel to biodiesel: a difference of 4 mpg and fewer trips to the gas station 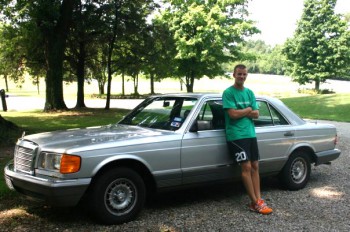 Most students spend their winter break sleeping in and taking a much-needed break. Greg Thiessen, a junior physics and biology major, spent his winter break converting his diesel car to run on biodiesel made from used vegetable oil.

While the process only took a few weeks, it took a little longer than that for Thiessen to decide to do it.

“I first thought about it two summers ago. I was working at Wilderness Wind [a Mennonite camp in Minnesota] and there was a lot of green initiative there,” Thiessen said. Part of his stay at Wilderness Wind took him to an environmental conference, where he first heard about converting diesel cars to biodiesel.

When he finally decided to try it, Thiessen had a valuable resource available: a man at his church who had already converted several cars. Thiessen bought a diesel car, spent several weeks acquiring parts from different online stores and began the conversion process.

“We spent three or four days putting everything together,” he said.

It took about 16 hours of work to complete the process. Thiessen had no prior experience with car mechanics, so he learned a lot from the experience.

Now Thiessen’s car can run on either diesel or processed vegetable oil. His process of preparing vegetable oil is not as elaborate as the biodiesel plant on campus, but it takes some time. The vegetable oil must sit for a while, allowing any particulate within the oil to settle to the bottom of the container. Then an electric pump is used to pump out the top, clean layers of oil into another container, where the oil settles again. Thiessen brought enough oil with him to Goshen that he hasn’t had to get it from the cafeteria or other sources.

“I don’t actually drive that often,” he said. He estimated that he goes through about two or three tanks of gas per semester. His car now gets 30 miles per gallon, an increase from 26 miles per gallon on diesel.

Converting a car from diesel to biodiesel is not just good for the environment—it’s good financially as well. In total, Thiessen spent about $1,200 on parts to convert his car.

“With prices of gas going up I was trying to get an idea of paying it back,” he said. “It would take about 30 tanks of gas to pay it back.”

The shift from diesel to vegetable oil was not without its difficulties.

“You have to be much more self-aware and conscious of how you’re treating your car,” he said.

The cold weather in particular presents a challenge to both diesel and biodiesel cars. Diesel and vegetable oil both congeal in the cold, so it takes a little while to heat up the car. Converting to biodiesel does not mean running entirely on biodiesel. Diesel is still required to start the car. Thiessen’s car now has a switch to flip between diesel and biodiesel.

Despite these issues, Thiessen is happy with his new biodiesel car.

“It’s a very cool project to do. It’s definitely possible to do, even in colder climate,” he said.

His advice for those interested in converting their own diesel cars? Do your research. There are multiple ways of conversion, but there are also many online resources available.