Students learn from women around the world in NYC 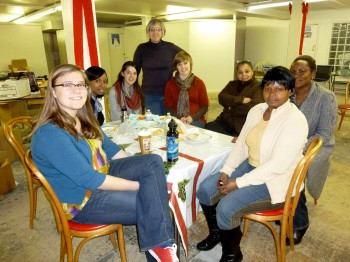 Forgoing the option of using this year’s spring break as a chance to seek warmer weather, Sarah Dieter, Sara Klassen, Becca Yoder and Beth Martin Birky instead traveled to New York City, seeking to learn how the United Nations is involved in women’s justice issues around the world.

Dieter, a junior, Klassen, a freshman and Yoder, a sophomore, are all taking Global Women’s Movement, a women’s studies course taught by Martin Birky, professor of English. The course examines gender roles in different global contexts.

“Part of the class focuses on women’s unique cultural experiences and activism around the world,” said Martin Birky.  “[The other] part of the class looks at the impact of globalization, development, and human rights activism on women, as well as women’s important role in the global economy and in local communities.”

Visiting New York City and the United Nations seemed to be a perfect way to see the topics discussed in class first-hand.

“I have never been to New York before, and being able to go within the context of something I am passionate about was very exciting,” said Dieter.

The group arrived in New York on Monday night (Feb. 28), and the next day met with the Mennonite Central Committee (MCC) at the United Nations to learn about how they advocate issues that MCC workers face while in different country locations.

Later that day and on Wednesday, the group attended conferences where government representatives presented on women’s issues and Nongovernmental Organizations from around the world offered sessions on key social and political issues facing women and girls.  They attended sessions by the African Women’s Millenium Initiave on Poverty and Human Rights, Iran Rooyan on the status of civil society in Iran and the African Women’s Alliance on African Women’s and Girls’ access to education.

“These sessions were valuable in learning more about the UN Women’s focus on women’s rights as human rights and in hearing women speak about their own experiences,” said Martin Birky.  “We heard some powerful testimonies of women’s struggles and successes.  It was particularly empowering to sit in a room populated by women from around the world.”

On Thursday, the group helped sort through clothing donations to the Haitian Resource Center in Brooklyn. During their visit, they learned about the center and met women visiting the center for legal advise and clothing.  They also met up with Sylvia Shirk Charles, a GC alum and previous GC campus pastor who works at the center, translating for Haitian refugees who are applying for asylum and visas.

“Of course it was exhilarating to be in New York, but it was inspiring to witness the powerful work of women from so many different settings,” said Martin Birky.