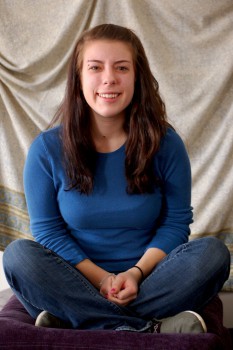 Any Goshen College student can testify: hitting the books is an essential part of getting a good grade, though reading about something and experiencing it are entirely different. Just ask Emma Ruth, a first-year sociology major who thought she knew all about Hutterites until she became one for a week.

Ruth’s interest in Hutterite culture was sparked as a child when she read a book about a young Hutterite girl.

“I was especially intrigued by the homemade ice cream that they made in the story… it looked so good,” said Ruth. She remembers staying home from school sick and evading boredom by watching a documentary about Hutterites. Ruth became so fascinated that she dressed as a Hutterite for Halloween.

It wasn’t until high school that Ruth became serious about studying the history and culture of the Hutterite community.

Hutterites are a communal branch of Anabaptists, whose roots can be traced to the Radical Reformation of the 16th Century, similar to the Amish and Mennonites. They live in secluded colonies and share all of their material goods communally. While they have accepted advancements in technology more than their Amish kin, they are wary of placing much value on worldly possessions. As a mark of this, Hutterites wear plain dress and attend worship services every night.

This is the lifestyle that Ruth chose to throw herself into for a week last January 2010. Her high school required seniors to spend a week in service or exploring a possible career. Ruth decided to bend the rules and spend her time in South Dakota with the New Elm Spring Hutterite Colony. She made arrangements with the colony boss, Joe Tschetter, to stay in his home.

When Tschetter picked Ruth up at the airport, he gave her unexpected news.

“The first thing he said to me was, ‘My brother died today so things are going to be a little different this weekend,’ ” said Ruth.

By the time she arrived at his house, people were swarming in from other colonies to prepare for the funeral. Before she even unpacked, Ruth found herself baking cookies, scrubbing floors, and setting tables. By the time the wake occurred at nearly midnight, Ruth was asleep, exhausted from the excitement of the day.

During the remainder of the week, Ruth’s schedule was unpredictable and dizzying. Tschetter took her on visits to twelve different Hutterite colonies. She attended meals, birthday parties and worship services conducted entirely in German.

“Everyone thought it was important that I see what they do,” said Ruth. “The butchers made me come to the shop to help them cut up the turkey cutlets so I could see what I was actually eating in the dining hall. One of the brothers in my home woke me up at midnight to come watch them load turkeys into the truck – a six-hour process. I drove a tractor, rode on a combine, learned how they operate the feed mill and visited both the German and English schools while they were in session.”

“Living on a colony is like living with your extended family,” she said. “You eat together, work together and interact with the same people on a daily basis. It’s completely normal to walk into somebody else’s house and answer their phone or go through their fridge.”

Ruth also realized that there are some things books won’t mention.

“You’re not going to learn from a book about what kinds of things the kids my age do behind the preacher’s backs. Hutterite youth are little rebels,” Ruth attested. She holds proof of this when she receives the occasional text sent on a forbidden cell phone.

By the end of her week-long stay, Ruth had formed relationships with many people at New Elm Spring. Now, a year later, she still keeps in touch via letters.  She even made a short trip back over fall break with her father and another GC student, Christian Allebach, a first-year. First-hand experience allowed Ruth to gain new knowledge of the Hutterites, and has now become part of her personal quest for education.