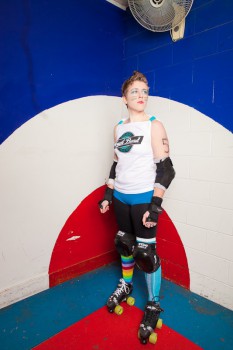 Charlotte Barnett, a senior, models her outfit as part of the South Bend Roller Girls.

On a Saturday night, Charlotte Barnett is likely to be found getting down and dirty on a pair of skates.

Barnett, a senior psychology major, is part of a newly formed roller derby league. The skating happens at USA Roller Skate in Mishawaka, where Barnett spins wheels three days a week, but before this summer, she had barely touched a pair of skates.

“I’d been on roller skates once in my life,” said Barnett. “But once I put pads on, I felt invincible.”

Barnett was introduced to derby this past summer in Charlottesville, Va., where she had an internship.

“I was hanging out at the mall and some girls came up to me and asked if I wanted to go to a derby,” said Barnett. “I said I didn’t know what the heck that was but sure!”

Barnett immediately fell in love with the sport.

“It was the combination of girls being super tough with great make-up, outlandish costumes and names like Beyonslay,” said Barnett. “It was like theatre and sport thrown together, making this fantastic combination.”

Barnett tried out for the team in Charlottesville and spent the summer learning about the game.

She worked with a mentor, an “older sister skater” named LadyFlash!, who helped with moves and technique. Before Barnett went home, she got to play one game in the league’s warehouse.

“I fell down more than I stood up,” Barnett said. “It was awesome.”

Upon her return to Goshen, Barnett didn’t want to lose her newfound hobby.

“South Bend had just started a league in April,” said Barnett. “I jumped right in.”

Since August, Barnett, also known as Stonewallop by her teammates, has been skating with 54 other active derby players. The league calls themselves the “South Bend Roller Girls.”

The idea for a league began with a Facebook post by Shannon Hoyt, known on the track as Hoytie Toytie. She started and helps coordinate the Girls.

“I’m 30 years old, I work in an office and I was bored,” said Hoyt. “I wondered if anyone else would be interested. 200 people showed up.”

“Most of the women are older and tough,” said Barnett. “They are such a nice group of people. We try to hang out outside of practice. It helps us learn each other’s styles of communication.”

Roller derby is a fast, quick, and dirty sport, requiring a lot of teamwork between members. The game is played on a circular track, with a race between two opponent players. These skaters, known as “jammers,” try to score points by passing other opposing members called “blockers,” of which there are four per team. The blockers’ job is to prevent jammers from scoring. Jammers are the only ones who score and the scoring happens continuously.

The ten players skate for two-minute intervals known as “jams.” There are two 30-minute periods, with as many jams as possible.

“It’s exhausting and you can get badly hurt,” said Barnett. “I’ve torn my ACL but I’d say it’s no worse than any other sport.”

For protection, skaters wear knee and elbow pads, wrist and mouth guards, optional tailbone guards and helmets. As far as uniform is concerned, derby is a chance to experiment and go wild.

“We have matching scrimmage shirts,” said Barnett. “Some wear skirts, boy underwear, leggings or hot pants. Some girls wear pretty much nothing. Whatever goes.”

The Girls have two coaches named G-Stop and Shreddy Davis. Neither can skate but members work with coaches to plan practices, research new skills and evaluate players. During practices, skaters work on special techniques like tomahawks (turning around to jump up on toes) or mohawks (sideways feet skating, like a plié).

The sport has caused Barnett to make some big changes in her lifestyle.

“I have totally changed my diet,” said Barnett. “I also exercise probably 10 hours a week. In derby, you’re only going one direction, so you have to cross-train.”

The Girls are currently in C-League and hold free scrimmages on Thursday nights. Last Saturday the league competed in a game called “B-Cup” with area teams. The Girls lost to Bloomington by 50 points and beat Lafayette and Warsaw by over 100 points.

“The trophy was a bra painted gold – a pun on purpose,” said Barnett.

Said Hoyt, “I think [derby] is a good chance for women of all ages, sizes, backgrounds and talent to really show what they are made of. I think it’s life-changing. There’s definitely a ‘never say die’ attitude behind derby.”

Barnett is planning to move to Charlottesville after graduation in May, where she hopes to continue skating.

“One of the main reasons I skate is because I can go anywhere in the world and find a derby,” Barnett said. “If I can’t find one, I’ll start one.”

Think roller derby sounds fun? The league is holding tryouts on the 27th. The first two weeks are a trial to test the waters and gear is not needed. If you are interested, contact Stonewallop at charlottelb@goshen.edu.