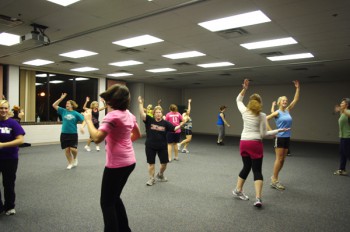 Zumba, the heart pumping, music infused, cardio workout dance class has entered the doors of the RFC.  On Wednesday and Friday evenings from 8 to 9 p.m., college students and community members gather for one hour to tone and sculpt their bodies with Latin rhythms and choreographed dance moves.

“I think a large number of the female population on campus has experienced Zumba now,” said Josh Keister, director of the Recreation and Fitness Center.  Keister counted 100 plus participants in the first Zumba class several weeks ago, eighty-five percent of which he estimated as college female college students.

Prior to meeting Dawn Yoder, the Zumba instructor at Goshen, Keister had never heard of Zumba.  Yoder, a trained Zumba instructor and new to the Goshen area, approached Keister about starting a class at the RFC. “She told me what it was and popularity of it, and so I decided to give it a shot and see if it would work.”

According to the official Zumba.com website, Zumba was accidentally invented when celebrity fitness trainer, “Beto” Perez forgot to bring his workout tapes to a fitness class in the mid-90s.  Beto improvised, and ran the class session with the Latin music tapes he listened to on his way to work in place of the usual workout tapes.  However, his class loved the Latin rhythms and energy of the class, and Beto quickly developed a new program which has since been “sweeping the nation.”

It is not surprising that Zumba has been widely welcomed on the Goshen campus.  Kelly Miller, a senior at Goshen, described the first class as a crowded room full of sweaty people and loud music.“I went because I heard it was a really fun way to get a good cardio workout and I wanted to find what it was all about,” said Miller.

Miller described the back of the classroom, where people were messing up constantly and giggling nervously at the “booty-shaking parts.” “It was a new thing, it was hard to see the instructor, but by the end we started to recognize the moves and really got into it,” said Miller.

Time and space have been the two obstacles regarding the new Zumba class on Goshen campus.  The attendance is large, but putting the class in the gym is difficult because of the necessary sound system and finding a free timeslot.  Additionally, Keister admits Wednesday and Friday evenings are not the best times for Zumba classes, but it is challenging to find free time in the busy schedule of the RFC.

For now, Zumba will remain in the classroom—but it is a great way to warm up during the snowy cold season.  After all, what can top heat, Latin rhythms and a community of lively dancing bodies?