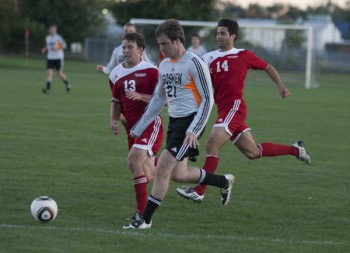 When sophomore Jan Dohnal arrived at Goshen College in mid-August, making the Mid-Central College Conference All-Conference team for soccer was the last thing on his mind. Born and raised in the Czech Republic, Dohnal came to the United States because he wanted to get a better understanding of the American legal system. Ever since high school, Dohnal’s dream has been to become a lawyer.  Growing up, however, Dohnal’s one and only focus was soccer as he traveled around playing on successful premiere club teams.

Dohnal was in high school playing on the first league team at an elite soccer academy when he was invited to attend the Czech Republic junior national team camp.

“Only a few guys from my team were invited so it was a big thing,” said Dohnal. “I didn’t go further than [the camp] but I was really excited for it.”

When the time came for Dohnal to go to college, he had a very hard decision to make: go to law school or continue to play soccer. Doing both was not an option for Dohnal as the academy practices were both morning and afternoon, with games every week.

Dohnal chose to become a lawyer and enrolled at Palacky University in the Czech Republic. During his first year at Palacky, Dohnal heard about an exchange program that would allow him to study the American legal system first hand. He applied for the program and went through a long selection process while researching schools in the United States. He knew he wanted a small, community-based college. Once accepted into the program, Dohnal chose Goshen because of the pre-law program.

“The U.S. is known for being very litigious,” Dohnal said. “It makes it very interesting for international students to come over here and see how it works.”

Set to attend college here at Goshen, Dohnal only brought his soccer cleats, not thinking he would need any other gear. But when he saw the soccer team play during pre-season he knew right away that he wanted to play. After talking to coaches Tavi Mounsithiraj and Jamie Graber, Dohnal immediately took a trip to Wal-Mart to get socks and shin guards.

It had been over four months since Dohnal had played soccer and he was not sure what to expect when he joined the team and began practicing. Nevertheless, his skill on the field was noticed immediately.

Junior Greg Thiessen remembers the first time Dohnal practiced with the team. “The reserves were scrimmaging our varsity and I was on the sidelines watching. I just remember seeing him run through our defense and score easily,” said Thiessen. “I looked over at our assistant Tony Janzen and said, ‘Yeah, I think he can contribute this year.’”

Not knowing anyone only made it harder for Dohnal to find his rhythm on the field with the rest of the team. Dohnal wasn’t sure what to expect from the other players or what style of soccer they played. But the team was very welcoming to Dohnal and helped him with his whole transition to the United States, both with soccer and school.

“The team was just perfect. Everyone is so friendly and helpful, and it eventually made it easier.” Dohnal said. “The coaches were perfect, they helped me a lot.”

Though Dohnal quickly became a starting forward, it wasn’t until roughly halfway through the season before Dohnal scored a goal.

“It was very frustrating because I think I played all right, but if you’re a forward and don’t score it’s a bad thing,” he said. “All the guys and coaches told me not to worry and were patient with me and that’s what I needed. It was perfect,” Dohnal said.

In Goshen’s 13th game against Huntington, Dohnal finally found the back of the net twice. He finished out the last seven games of the season with six goals and was named to M.C.C.’s First Team All-Conference.

“It’s just about the first goal that you need to score, then once you pick it up again everything works,” Dohnal said.

Dohnal has enjoyed his time attending school and playing soccer at GC so much that he hopes to extend his experience for another year. “I like the school, soccer program and people,” he said.

His teammates have enjoyed Dohnal’s contributions on and off the field as well.

“It was great that Jan joined us this year on the pitch but also as part of the G-town fam[ily],” said junior Julian Sider. “I hope he sticks around next year.”