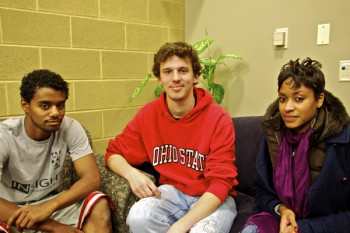 What kind of impact does the Elkhart County Fairground have on the local community? To answer this question, the Elkhart County Fair Board of Directors contacted Michelle Horning, professor of accounting at Goshen College. Since February, Horning has been working on this research project with seniors Brett Bridges and John Tamrat, sophomore Matt Nafziger and Jennifer Cree (’10).

“Our project is trying to gather the data to support our answer,” said Horning. “We want to know what kind of impact they provide to the community. We’re trying to answer questions like, when people come to the Elkhart County Fairground for an event, do they spend money on the local community that benefits businesses?”

The Elkhart County Fairground has two major activities during the year. One is the county fair, which takes place for two weeks in July. This is the fourth largest event in the state of Indiana. The second is the R.V. Rally, which begins in late April and goes through October – a period in which they hold from 15 to 20 different types of rallies.

Over the summer, the study was focused on surveying fairgoers to find out where they were coming from, how long they intended to stay and how much money they were spending at the fair and outside of it.

“I don’t like interviewing very much,” joked Matt Nafziger.“And that was something that I had to do. It challenged me and forced me to get outside my box. I interviewed about 50 people and as a group we interviewed 250 people. Now we’re working on putting together the data in order to put together a report.”

Horning noted that an interesting economic impact is that there are a lot of vendors at the fair purchasing supplies from local businesses. People who go to the fair might not be eating in restaurants, but the vendors who need to buy ingredients and supplies are buying those in the local community. “There’s an indirect impact to the business community,” said Horning.

On the other hand, people who attended the R.V. rallies were coming from all over the country and staying in Elkhart County from three days to two weeks. These visitors eat in restaurants, go sightseeing, go to the movies and go shopping. The study has found that for the R.V attraction there are much larger dollar amounts being spent.

GC alumnus Jennifer Cree  said, “At some points this project was very difficult, but I was committed to the project and wanted to do the best job possible. The project helped me with my shyness as far as going up to strangers and asking them questions. I also got to hone my research skills and learned valuable knowledge about the fairgrounds.”