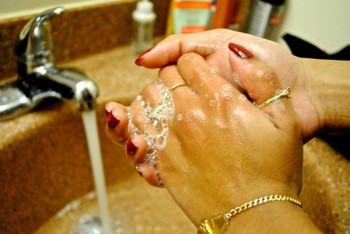 Last week more than 50 Goshen College students came down with a flu virus that has quickly come to be known around campus as “The Plague.” This flu epidemic began early last week and continues to affect students and faculty alike. Officials are hoping that the worst of the outbreak is over, but students are still asked to take precautions and do what they can to prevent the bug from spreading.

“I know of at least six people on my floor who have gotten sick so far,” said Eliza Graber, a sophomore resident of Yoder Hall. “It came so quickly. One moment my friend was fine, the next she was running to the bathroom.”

In response to the flu outbreak, the Goshen College Wellness and Health Center has issued several cautionary messages in the Campus Communicator.

“The virus that is going around with symptoms of nausea, vomiting, diarrhea, low-grade fever and stomach cramping is contagious,” warned the Health Center message. “In most people, symptoms will last one to two days.”

The message also suggested several preventative measures that students can take to avoid contracting the flu. These steps include washing hands with soap and water, disinfecting contaminated surfaces, and washing contaminated clothes. Students are encouraged to generally be more cautious about the items they touch and the people with whom they come into contact.

Unfortunately, the Health Center’s warnings have not stopped more than 15 percent of the student body from getting sick since last week. According to a Facebook event page that has been documenting the spread of “The Plague,” roughly 60 students had come down with the illness as of Wednesday evening.

Faculty members have not been immune to the virus, either. Last week several professors were forced to cancel class after coming down with flu-like symptoms.

The good news is that the vomiting and diarrhea symptoms typically only last for 24 hours, and most students get better almost as quickly as they become ill. Perhaps the best news of all is that, for the most part, the worst of the flu outbreak seems to have passed.