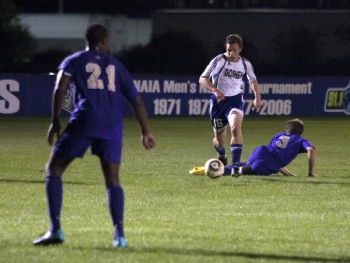 The Goshen men’s soccer team finished their regular season against Indiana Wesleyan University on Oct. 19. Eleven days later, the Leafs traveled back to Marion, Ind. to face the Wildcats in the opening round of the MCC tournament. It marked the fourth consecutive year that saw these two teams face off against the other in the MCC tournament. It was also the fourth consecutive year that saw IWU knock the Leafs out of the tournament; the Leafs lost 4-3 on Saturday.

After a 2-1 defeat in their previous meeting, the Leafs were still unable to find their way around the Wildcats. While this game was more offensive, it was still just one goal that separated the two teams as IWU came out on top.

The game started off quickly as IWU opened the scoring within the first minute of play off a corner kick. Less than two minutes later, Goshen equalized as Greg Thiessen fed fellow junior Julian Sider the ball just outside the box and the Harrisonburg, Va. native found the back of the net with a 14-yard strike.

The remainder of the half saw fairly equal play until five minutes to go. In the 40th and 43rd minutes IWU scored their second and third goals of the game. Both goals were headed in off of corner kicks. The two teams went into the half with IWU up 3-1.

The second half started out much like the first. Just 37 seconds in, IWU netted their fourth goal to put them up 4-1. Despite being down by three goals, the Leafs refused to give in.  In the 61st minute Goshen cut into the lead as Charlie Frederick scored from 14 yards out.

Roughly 20 minutes later, senior Raymond Waweru sent the ball in the air to sophomore Jan Dohnal. Dohnal controlled the ball with his feet and sent a 12-yard strike into the net for his sixth goal of the season. Unfortunately for the Leafs, time became a factor. With only 10 minutes left, they were unable to find the equalizer resulting in a tough loss.

Goshen finishes the season with 5-14-0 record. However, the future looks bright as Goshen looks to return the bulk of their starters for next season.

“I noticed that we only had two seniors on the field and tonight was the first time we actually felt like a team and the boys were happy to be here together,” coach Mounsithiraj said.