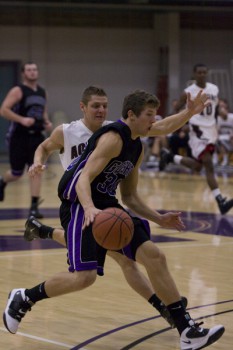 The men’s basketball team survived a late surge Tuesday night to pull away with a 77-70 victory over visiting Aquinas College in their first game of the season.

After leading comfortably for most of the game, Goshen found itself up by only two with less than 30 seconds left to play. The Saints put together an 11-3 run in the closing minutes to make it 72-70 after trailing by as many as twelve points in the second half.

Aquinas seemed to have the momentum until Goshen inbounded a pass to junior forward Nate Manning who broke away from the defense with a clear path to the basket. Aquinas fouled him intentionally to avoid an easy layup. Manning split the ensuing free throws but the Leafs retained possession and sophomore Austin Hefley put in two more free throws extend the lead to five. Goshen could breathe again after the Saints missed a three point shot with five seconds left.

The win is a positive start for the Goshen team that graduated last year’s leading scorer Errick McCollum II. Leafs’ head coach Gary Chupp said the team’s strength is its depth.  Sophomore Kyle Davis led the Leafs in scoring with 20 points and three assists. Hefley scored 19 points off the bench – 13 of them from free throws. Manning finished with 11 points and Szablicki scored 8. The rest of the team combined for an additional 19 points. The Saints were led by Junior Damacious White with 23 points and Jamell Hatchett with 12.

Both teams gave up significant fouls and turnovers in the first game of the season, combining for 50 turnovers and 53 fouls. In penalty shots, Aquinas was 8 for 8 in the first period while Goshen missed nine of their first 12 penalty shots. The Leafs lead 38-32 at halftime due partially to a 19-10 turnover margin. The Leafs got into rhythm in the second half and hit 19 of 24 free throws to keep the Saints at bay.

Goshen led by as many as 12 points in the second half but every time it looked as if the Leafs were pulling away, Aquinas put together a run to keep it close. Aquinas led twice early but trailed by at least six points up to the last minute after a Goshen 9-0 run with six minutes left in the first half.

“It shouldn’t have been that close at the end,” Chupp said, “But I was really pleased with the effort.”

The Mid-Central Conference coaches’ poll picked Goshen to finish ninth in conference play. Aquinas was picked to finish third in their conference. The win puts the Leafs on the right track to pass expectations.