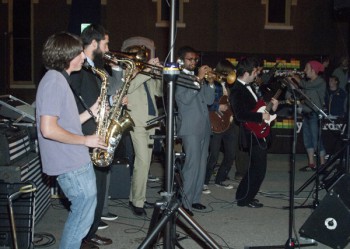 “Live music is so fleeting,” says Jake Miller, a senior. “So we try to build a moment.”  Since the formation of the band Kansas Bible Company nearly two years ago, that idea has been a driving motivation behind the band according to it’s front man.

Deriving its name from the business that a con man starts with a fatherless young girl that he encounters in the 1973 film “Paper Moon,” the Kansas Bible Company encompasses a blend of rock and roll, funk, and soul, and is influenced by such acts as The Beatles, The Rolling Stones, Led Zeppelin and The Pixies.  KBC has been popular with students at Goshen College since it began performing in the fall of 2008.

So what is it exactly that draws students to their concerts?  “We’re live music, and live music’s fun,” Miller said.

Since its inception, the band has stayed mostly intact, losing only one original member and picking up several more along the way.  The current lineup of 10 is made up of current Goshen College students: Nate Klink on drums, Jake Snyder and Jake Martin on saxophone, James Green and Charlie Frederick on trumpet, Isaac Lederach on trombone, Rafael Chavez on bass, and Michael Ruth, Jeff Yoder and Miller on guitar, with Miller and Green contributing vocals.  In the spirit of fun live music, the band has given each member a nickname, such as “Sleepy Eyes,” “Klinkity Klank,” and “Yagoo Bear.”

KBC performs mainly original compositions, many that have been written by Miller.  Snyder, Ruth and Yoder have also contributed songs as the band works towards being more collaborative in the songwriting process.  According to Miller, the writer will come to practice, which they do two or three times a week, with a general idea of how they think the song will sound.  But once they bounce some ideas off of each other, the song “becomes its own creature,” he said.

The band tends to focus on what Miller refers to as “tense subjects,” ranging from thoughts on Christianity to sex to drug use.  Themes fans might relate to . Many times after shows they talk to Miller about the topics explored in the songs.  Miller often finds himself observing the reactions and responses of the crowd while on stage and is pleased that they can connect with the audience so well.  Despite the impermanence of the performance, KBC feels that if they can “build a moment” during which the audience and band connect with good energy, they have fulfilled their objective.

The band has some professional aspirations, as well as wanting to connect with their audience.  Miller says that the overall goal is to be professional.  KBC will be in the recording studio in November in the hopes of releasing a record and plans to tour this coming summer.  But in the meantime, they will be showing up in any number of live venues, from house concerts, to First Fridays, to other places around town.  But no matter what they do from here, they will continue to perform live.  Because live music is fun.