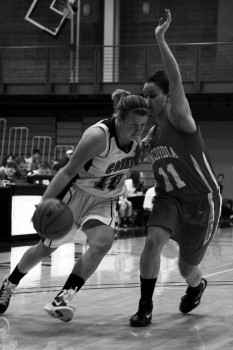 The Goshen College women’s basketball team played their season opener at home last night, facing off against non-conference opponent Concordia University and ending the game with a 75-59 loss. Goshen took the quart with fewer injuries and a deeper bench then they did last year.

The Leafs appeared confident early, as they came out and led Concordia 18-17 just with around 12 minutes left on the clock in the first period. Concordia responded with a very physical game, which, for the most part, shut Goshen down on both ends of the ball. Before the clock expired at halftime, the Cardinals had out fouled Goshen 10-7, but also managed to put an additional 20 points on the board, making the score 37-24 at the break.

Goshen rallied in the second half, cutting the lead to 6 points with a score of 45-51 and 8 minutes left in the game.  Concordia crushed any hope of a come from behind victory for the Leafs, taking command of the quart, and putting up 23 more points, making the final score 75-59. Goshen committed a number of fouls and turnovers in the last few minutes.

Top performers last night for the women include seniors Cassie Greives and Lindsay Gangloff, who both appeared strong at the board. Unfortunately, Gangloff went out with an injury after she tripped and fell with under a minute left on the game clock.

The Leafs hit the road on Saturday as they travel to Notre Dame to play Holy Cross College. Aspirations are still high for the rest of the season, and the team hopes that a deeper squad will make a difference this year.