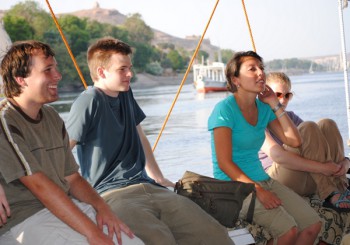 In Cairo, one cannot walk down most streets without noting densely packed areas of various shops. These however, may take on a different flavor depending on where one walks and during what time of day. For example, a group of us walking near the Metro station in Helwan may be grabbed on the arm and dragged in the general direction of a person’s shop, with hardly a word. A move that confuses me if you’d want to encourage a purchase from a western patron.

In other, more “touristy” areas, we may have “We love Obama!” shouted at us as an attempt to bolster our Western egos. This applies to all nationalities. In some places, such as Aswan, we have been mistaken for Australian, witnessing the rather impressive mock-accented “G’day Mates!” from shopkeepers. A constant strategy in just about any area is to grab the tourist’s attention to lure them towards a shop. Perhaps this is because most of these shops carry near identical wares despite their close proximity.

One must admire the enthusiasm. One of the more memorable shopping experiences was in an alabaster shop. The salesmen explaining alabaster would always separate the word as such: “al-a-bast-er!”, which his coworkers promptly followed with “Wooooow!” To be quite honest though, many of the members of our SST group found this to not necessarily increase their interest in a purchase, although it was amusing. They also gave us free tea and soda, as another “be our customer” offering. Other attempts are not so endearing: the way shopkeepers stalked some of our group in Luxor bordered on the kind of creepiness that can land a person in a lawsuit, telling us we were angry or crazy when we attempted to get away from them.

Amidst all these less-than-tactful sales pitches, shops in Sinai this past week presented a refreshing change. Although a tourist area near the base of Sinai, the shops in St. Catherine had friendly, and even painfully honest shopkeepers. These shopkeepers invited us politely to look at their shops without seeming to block our exits. When Peter Miller, Tillie Yoder, and I entered a jewelry shop, the shopkeeper informed us his gold jewelry was merely gold plated and that he had tried to warn other members of our group. I personally doubt that a shopkeeper would lie about such things. The kind of friendliness and seeming concern for what kind of products we were investigating was, by consensus, a place we would much rather shop. One thing I don’t think westerners often think about is the way our goods are presented by vendors. I can honestly say on this trip, if I feel comfortable in an area, I’m much more likely to make a purchase, regardless of if a less-comforting shopkeeper has an item I seek.