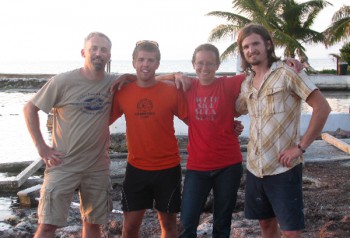 There are several learning opportunities in the marine biology program. Students who have never studied marine biology before are given normal coursework, while past students are encouraged to return to do independent research projects and act as research assistants in place of teacher’s assistants. Sensenig says the program is set up in this way to “try and get students involved in more research and learning topics at the [Florida] station.”

While most of the students focused on the class, senior Ross Weaver and 2010 Goshen graduates Alex Caskey and Camry Hess spent their second trip in Layton beginning an ecological research project brainstormed by Sensenig.

The research focuses on sea turtle grazing and how the decline of sea turtles affects fish foraging and habitats. The team monitored fish behavior and how they forage in both clipped and unclipped patches of sea grass. Sea grass is the main food of choice for sea turtles and grows in shallow, muddy water that is about two to five feet deep.

Using only hedge clippers and snorkeling gear, the team had more trouble clipping underwater sea grass than they had originally anticipated. The group encountered many other problems as well, such as how to record observations of fish behavior without disturbing them and dealing with water currents.

“We had to stay in one place while clipping, but sometimes the tide would just carry us away,” Weaver said.

However, running into numerous problems is to be expected when conducting research. “Research is defined by lots of little problems,” Sensenig said. “You’re creatively trying to figure out how you control variables in a complex systems.”

Weaver said the research was a good lesson in patience. “At first it seemed like all we did was run into problems,” Weaver said. “But every bump aided us in refining our procedure.”

Since cut sea grass is more nutrient-rich, the team hopes that the sea turtles in the Layton area will continue to maintain the cut sea grass areas started by the researchers.

The project is too new to reveal significant results, but Sensenig insists it is just the beginning. “We’re poking the system a little to see how it operates to develop a long term project down the road,” Sensenig said. Ideally, returning students will continue the research in future May terms.

“It’s a great opportunity for students to get involved with research,” Weaver added. Anyone interested in getting involved with the sea turtle grazing research can contact Sensenig by email at rlsensenig@goshen.edu.