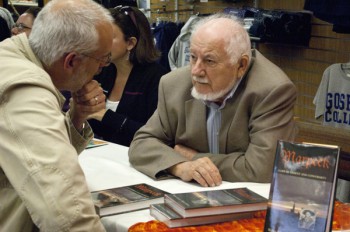 Author and theologian William Klassen’s experiences at Goshen College included waking up in the middle of the night to load 300 chickens onto a truck as part of a part-time job, taking courses in history and English, learning from speakers and participating in age-old GC traditions. He graduated in 1952 with a bachelor’s degree in English and History and eventually studied at AMBS and Princeton to develop his religious studies.

One tradition Klassen participated in during his GC days was the annual feast with Harold Bender, dean of students and professor of theology at the time.  Every year, Bender would welcome back new students with a festive feast at the college cabin.  Bender always made oyster stew.

“A lot of us prairie boys couldn’t take oysters,” said Klassen, describing the three years he spent trying to eat the oysters from Bender’s stew.  Finally, the “prairie boys” approached Bender.  “We persuaded him to also serve chili,” said Klassen.

In English classes, Klassen was introduced to American and world literature.  “It opened my blinders to what the human race has done,” said Klassen.  “It’s given people hope.”  History was the same way for Klassen, who compared burning people at the stake hundreds of years ago to current practices such as the electric chair.  “It’s crazy,” he said.

While Klassen expanded his knowledge at GC, he also expanded his stomach at the Honey Crust Bakery where he worked, learning to love Long John donuts and Danish rolls in his spare time.  Klassen also worked for the funeral home and went on missions to pick up accident victims and take them to the hospital.  “I learned to meet people at the point of their greatest need,” said Klassen. He also sold and installed lightning rods, climbing 300-foot chimneys by himself to install them.

Klassen always knew he wanted to be a preacher, but it was because of his advisor Howard Charles that Klassen developed his English and history education major.  “He persuaded me, although he was a Bible teacher, to study things beyond the Bible because that’s how we become better.”

After Goshen, Klassen attended Associated Mennonite Biblical Seminary after which he attended Princeton as a provisionary doctoral student.  AMBS wasn’t fully accredited at the time, but two years later Klassen was admitted for the remaining two years.

By 1957, Klassen had finished his residence and began his thesis about a 16th century Anabaptist leader named Marpeck.  During Alumni weekend, Klassen held a book signing for his book entitled Marpeck, co-written with Walter Klaassen. Now, 50 years later, Klassen is celebrating his doctorate from Princeton—and he’s the only one still alive to do it.

Klassen taught Greek for 11 years at AMBS, and he also became head of the religion department at the University of Manitoba.  In 1981, Klassen went to Jerusalem for four years as dean of Interfaith Peace Academy.  He was also principal of St. Paul’s College at the University of Waterloo.  Since then, he’s become a grandfather, “which is also great fun,” he added.

Klassen’s advice for current students at Goshen College is to “find professions where you actually help people.  The human predicament is the center of our problem. We have to solve the problem of being human and what it means to be human before we can solve other problems.”