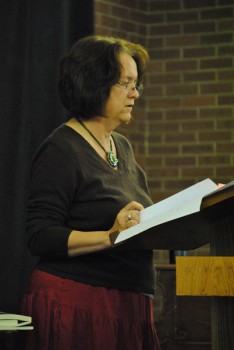 Hostetler left for Dresden for a year in August 2009, her second trip to the east-German city.  She was intrigued by Dresden’s distinctive culture, with influences from the time of Soviet occupation, which ended with the German reunification in 1990.

While in Germany, Hostetler taught a graduate-level American literature course at two German universities.  In addition to teaching, she collected east-German poetry, wrote her own poetry and continued her research.

“One of the things I’ve been exploring is the potential for poetry as a language for reconciliation or forgiveness,” she said.

Dresden provided a good setting for the continuation of this exploration because of the hardships the city went through during World War II, Dresden bombings in 1945, its association with Nazi Germany and  its oppression under Soviet occupation.

Hostetler explained that Germans still have to deal with people associating them with Hitler and Nazi Germany.

“War is a very recent memory for the people of Dresden.  They have a sense of self-reflection, self-criticism, but there is an emphasis on tolerance,” said Hostetler.  “They were on the wrong side of a bad war, so they are learning how to recover and build from that, which is especially difficult when you are from a different generation.”

With this history as a backdrop, Hostetler explored how poetry could be used as a way of resolving inner conflicts.

“Poetry can help you explore the honest, deeper truth that you write from,” she said.