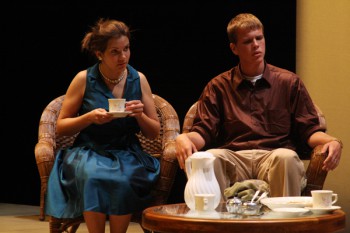 An evening of discovery, reconciliation and deeply buried secrets are in store for audience members who attend the world premiere of “A Gentler Place,” this Friday, Oct. 1 in the Umble Center at 8 p.m. The winning play of the 2010 Goshen College Peace Play Contest, “A Gentler Place” is also the Goshen College directorial debut of Tamera Izlar, who joined GC this fall as assistant professor of theater. “A Gentler Place” will also run Saturday, Oct. 2 at 4 p.m. and Sunday, Oct. 3 at 2 p.m.

The playwright, Jeff Carter, will be in attendance for all three performances, and will be available for follow-up conversations with Izlar after each show. Carter, originally from Northern Maine, currently resides in San Francisco, Calif. He  studied theater at the University of Maine and has been involved in the San Francisco Bay area theater scene for years.

Carter’s play is based in a small town where a new couple uncovers a forgotten act of violence that force them to deal with tough moral issues. “‘A Gentler Place’ is about the conflict between what is just and what is right, between your conscience and the law, between a person’s whole life and their gruesome past,” said junior Emily Bowman, who plays the character Lynn Newsome.

“In this play, Jeff Carter challenges audiences to consider what they are willing to sacrifice to achieve peace,” said Izlar. The cast is composed of only three actors, and all the dialogue occurs on a porch.

Sophomore Samuel Jones plays the Sheriff, Don Oldenburg. “I am a nice guy, good sheriff, with small town characteristics. I have been through a lot in my life,” said Jones of his character. “My character does what he thinks he should do because that is keeping peace in his opinion,” said Jones on his character’s motivation.

The other male character is Bryan Newsome, played by Martin Hofkamp, a first-year. Bryan is a writer and college professor, and one half of the new couple to move into town. “My character is a struggling writer and a loving husband with a story at his fingertips that is much too real for his comfort,” said Hofkamp. He added that it is Bryan who keeps the plot going, trying to fix the problem without thinking about all of the consequences first. “He wants to do something,” said Hofkamp. “He wants to fix the situation quickly and justly, but not necessarily peaceably.”

Bowman plays Bryan’s wife, Lynn Newsome. “Lynn is a sweet, cutesy, kind and compassionate woman who seeks the good opinion of others and wants very desperately to fit into this new town and foreign lifestyle,” said Bowman. She added that each character offers a unique point of view on the situation and how to effectively deal with it.

“Everyone should come see the show. It’s an intriguing story,” said Jones. “Also, if you are an advocate for peace, you should see where your opinion lies in this scenario.” Tickets for each performance cost $3, and can be purchased at the door.